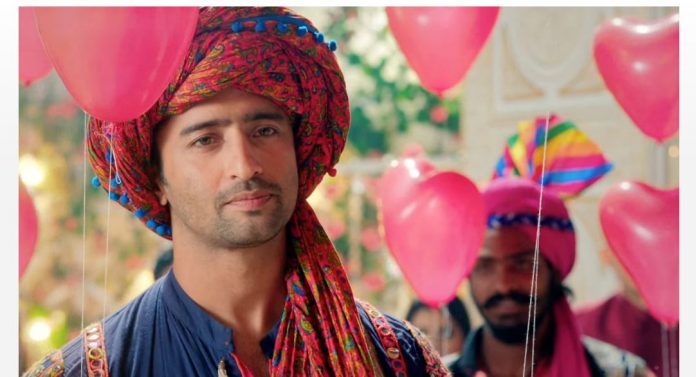 Rishtey Pyar Dilwale Dulhania track for Mishbir Abir and Kunal make plan to enter Maheshwari house and stop Mishti’s Roka ceremony. Kunal asks Abir to give him a chance to prove himself. He wants to be Abir’s brother all his life. He regrets to never understand his responsibilities. He tells that he always made Abir do everything for her, but didn’t think of assisting him ever. He holds a big regret burden on his heart. Abir agrees to give him a chance. The Rajvansh brothers head to Maheshwari house. Mishti prepares for her Roka. Kuhu tags the Roka ceremony for Mishti and Nannu. Nannu is much happy for himself, since he is going to get Mishti forever. Jasmeet tries being happy.

She gets worried when some ladies taunt her about accepting Mishti as her Bahu. The ladies ask Jasmeet how did she compromise. Nannu doesn’t think that accepting Mishti is any compromise. He tells the ladies that even he is a drug addict, his past isn’t so clean that he gets deserving of a gem like Mishti. He feels that Mishti can never be inferior to Maheshwaris in any terms. He praises Mishti. His reply surprises one and all. Shaurya and Varsha feel proud of him, while Jasmeet likes his smiling face. Jasmeet wants her son’s happiness.

On the other hand, Meenakshi tries to insult Parul and show her place. She is angered that Parul is controlling her sons. She doesn’t understand that Parul is giving freedom to Abir and Kunal to follow their hearts. Nanu is much upset on Meenakshi, knowing that she had blackmailed Abir to leave Mishti. He feels she has committed many sins on the name of family unity. He doesn’t want to keep terms with Meenakshi. He avoids Meenakshi, which hurts her. Parul wants Meenakshi to realize her mistakes. Rajshri asks Mishti if she is happy about the Roka.

Mishti tells that she is indeed happy knowing Nannu will never withdraw support. Mishti tells Rajshri that she is all set for the Roka. Rajshri feels Mishti and Nannu will be a great couple. Kunal meets Maheshwaris and surprises them with his helpful gesture. He gets the dhol artists with him. The Maheshwaris get glad at first and then get shocked seeing Abir. Abir enters in his heroic style reminding Mishti about their first meet. Mishti feels his presence and then gets him into sight. She realizes his efforts which got too late. Abir gets poetic to connect with her heart. His move upsets Vishwamber a lot. Vishwamber wants Abir out.

He reminds Abir about intentionally breaking Mishti’s heart and relationship. He never wished Mishti to face sorrow. He blames Abir for making Mishti cry so much. He tells Abir that Mishti has moved on and now she values herself. He doesn’t want Mishti to fall for Abir by ruining her self esteem. Abir has no answer, since he is at fault. Kunal tells Vishwamber that Abir has come to help Kuhu and is part of her company. He doesn’t want Abir to leave. He requests them. Rajshri asks Abir to stay back, but not expect the Roka to stop.

She asks Nannu and Mishti to go ahead. Mishti doesn’t want Nannu to wait for her. She vents her annoyance on Abir. Abir creates a moment with Mishti. Mishti tells Abir that its too late to regret. Abir asks her for a final chance. Nannu warns Abir against his attempts. He asks Abir to keep his respect, which is in his own hands. Vishwamber accuses Abir for leaving Mishti after promising togetherness. He can’t forget this. He is sure that Nannu will always be with Mishti. Nannu and Mishti get engaged.

Nannu promises her that he will always be with her. He wants Mishti’s happiness. Abir recalls his engagement with Mishti. He doesn’t want to accept defeat. He learns that Mishti doesn’t love Nannu. He gets glad knowing that Mishti still loves him. Abir and Kunal challenge Mishti to get a place in Maheshwari house. They want to change her mind and stop the marriage. Kunal and Kuhu will play cupid for Abir and Mishti. Abir is sure to win his bride Mishti.