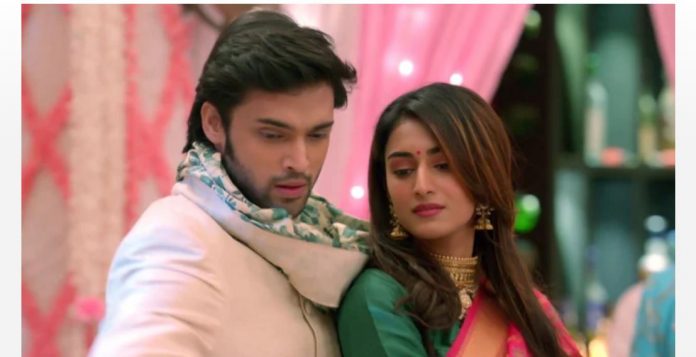 Kasautii Zindagi Kay Starplus Ronit killer attempt on Prerna Anurag and Komolika invite Prerna and Viraj in the new year party. Komolika has evil plans to get Prerna killed. She meets Ronit and asks him to not let Prerna escape this time. She thinks once Prerna and her child dies, Anurag will have no option than to love him. Mohini, Nivedita and Veena want to bring Prerna close to Viraj. The trio are against Anurag and Prerna’s union. Veena doesn’t think Anurag can do justice with Prerna ever. Ronit promises Komolika that he will kill Prerna, even his aides will help him in the task. Ronit and his aides take the waiters’ disguises to enter the party.

Ronit signals Komolika about his aides who will try to kill Prerna. Komolika is all smiling to bid a farewell to Prerna. Prerna thinks Komolika doesn’t know that her plans will bring Anurag more closer to her. Anurag and Prerna meet in the party. They perform dance and look close. Viraj finds it odd seeing their bonding. Viraj performs dance with Komolika. Mohini is also troubled seeing Anurag’s inclination towards Prerna. Prerna feels uneasy. Anurag takes care of her. Viraj feels like he doesn’t exist for Prerna.

Komolika is well prepared to separate Anurag and Prerna. Viraj is confused and feels Anurag and Prerna love each other. Mohini expresses her annoyance to Moloy. Moloy tells her that Anurag and Prerna are destined to be together. Anurag feels Prerna’s pain. He wants to know their past. Viraj witnesses their togetherness. He stays away from Prerna. Mohini is afraid that Anurag may get a stroke because of his old memories. Ronit will attack Prerna in the party. Anurag will obviously rescue her.

Reviewed Rating for this particular upcoming twist:3/5
This rating is solely based on the opinion of the writer. You may post your take on the show in the comment section below.

Nimki tells that she has belief that Mahua will come back. Tunne finds the bus number from the selfie. Nimki and Abhimanyu try to get the bus driver. Mintu yells at her about his Dadi. Nimki asks Mintu to manage Anaro for some more days if he wants to help her. On the other hand, Ganga and Parag stay busy in their work. Mishra wants to meet Ganga. Parag asks Mishra what is he hiding. Ganga tells that its not regarding politics. Mishra tells that the girls got to know about the fake beauty pageant. Ganga asks him to handle it. Parag tells her that she forgot Nimki in the minister list. He tells that Nimki has helped them in tackling Shukla.

Ganga tells him that Nimki won’t be able to handle the ministry, she planned to gift her something else. Nimki gets informed about the driver location. Nimki goes to meet the driver. Mishra tells Ganga that he will clear the matter. Ganga asks him to end the matter completely in one strike. Mahua and the girls try to escape. Nimki, Abhimanyu and Tunne reach the driver’s house and find him dead. They realize that someone is ahead of them.

Nimki doesn’t know how the criminals manage this easily. Abhimanyu tells her that criminals get back up from the politicians. Sunita asks the girls not to create a drama, their fate is written now. Nimki promises her dad that she will save Mahua. She wants to punish the culprit. Mahua escapes and gets shot by Nirmal.