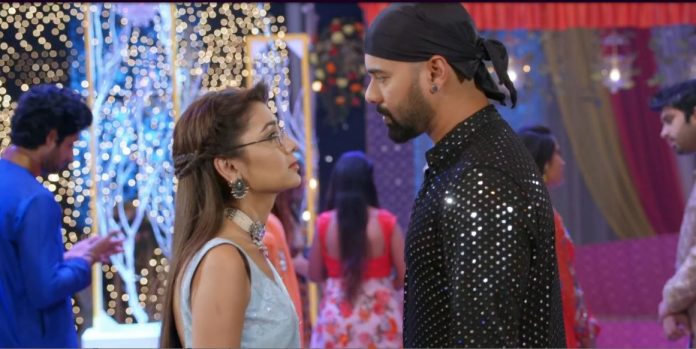 Kumkum Bhagya Special Twist Abhi Pragya finally meet Abhi tells Purab about Meera’s strange behavior. Purab asks him not to fire Meera. Abhi tells him that once Rhea gets married, Pragya and he will have their love story openly without any fear. Purab tells him that love is always known to everyone, while secret affair is a sin. He thinks of Disha. Aaliya tells Rhea that Prachi can do anything for her respect and also other girl’s respect. She tells that Maya will blame Ranbir for molestation and then Prachi will be against him.

She asks Rhea to show trust on Ranbir so that he loses his heart to her. Rhea is worried that Abhi will hate Ranbir when the latter gets defamed. Aaliya tells that she can manipulate Abhi easily by getting Maya’s statement in her favor. She wants Rhea to get Ranbir’s love. She promises to execute her plan right away. Aaliya loves Rhea a lot. She can do anything for Rhea. Shahana wants to meet Ranbir again. Prachi doesn’t let her. Ranbir tells Aryan that he is too nervous in front of Prachi. He wants to know his problem. He wants to get calm. He tells that he is in love.

He wants to look mature and perfect for Prachi. He wants his love story to get on track. Aryan tells Ranbir that he doesn’t love anyone, he can’t give him any advice. Ranbir doesn’t want to get late. Aryan tells him that they can ask someone experienced for help. Ranbir thinks to ask Abhi or Pragya. He doesn’t want to ask Vikram. Aryan asks him to try and speak to Vikram. Meanwhile, Abhi and Pragya happen to meet in the Lohri celebration. He asks her about her well-being. She tells him that she is fine. He tells her that he is a bad person, since she didn’t tell him that she shifted the house.

She tells him that it wasn’t her house. He tells that he wanted to talk to her. She knows he would blame her. Purab doesn’t want them to fight. He makes an announcement. He asks Abhi to perform Bhaangra in Lohri celebration. He wants him to sing a song as well. Abhi blames Pragya for calling Purab and making him announce such a thing. He feels Purab always supports her. He goes for the performance. Pragya tells Purab that Abhi wasn’t fighting with her. Meera falls for Abhi on hearing his heart touching song. Abhi sings the song and dedicates it to Pragya. Meera performs with him in her imagination.

Abhi performs with Pragya. Aaliya gets disappointed seeing Pragya back. They both look very happy together. Pragya gets a sprain in her foot. Abhi takes care of her. Vikram asks Ranbir if he is really in love. Ranbir knows Vikram will not help him. Vikram assures that he won’t ask the name of the girl. Ranbir lies that his friend is in love. He explains his problem. Vikram can’t believe that Ranbir is in love. He asks about his friend. Ranbir asks him to just give a solution. Vikram asks if the guy wants to marry the girl or not. Ranbir doesn’t think of marriage. Ranbir doesn’t want to admit the truth. He goes away.

Vikram still understands that Ranbir is taking advice for himself. Aaliya calls Maya home with a motive to frame Ranbir. She asks Maya to frame Ranbir for molestation and make it look genuine. Maya asks Aaliya to arrange drugs for Ranbir. Maya asks the reason for their revenge. Rhea doesn’t want to reveal anything. She warns Maya against interfering in her story. Maya understands that Rhea loves Ranbir, but he loves someone else.