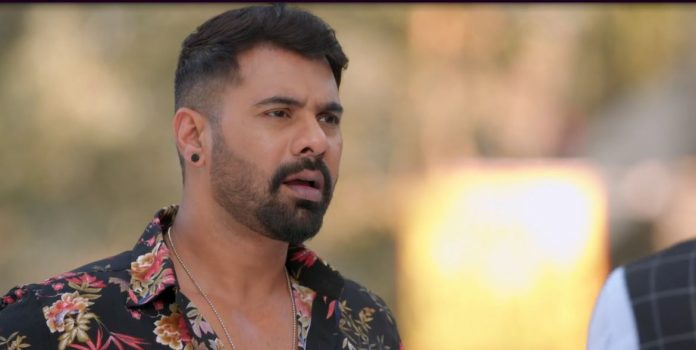 Kumkum Bhagyaa Abhi surprising move Rhea veils evil Maya lies to frame Ranbir in the crime. Ranbir gets a shock when she cleanly cooks up the dirty story of his misbehavior. Shahana tells the police that Maya is lying, she was happily with Ranbir. The media scolds Shahana for insulting Maya. Rhea tells that she knows Ranbir well, he is innocent. Maya asks Prachi to give statement in her favor. Prachi tells inspector that she also knows Ranbir, he can’t molest any girl. Inspector wants the witnesses to come ahead. Abhi wants to bail out Ranbir. Maya asks inspector not to leave Ranbir free on bail. Abhi understands that Maya is lying. Inspector asks them to leave, and not defend a criminal.

Vikram asks Abhi not to fight with the police. Rhea and Maya share a laugh. Ranbir gets troubled by the police. He worries for his family. Pallavi fears for Ranbir. Abhi and Vikram fail to get Ranbir home. Abhi assures that Ranbir will get free. He promises her. Purab knows that it won’t be easy to free Ranbir. Purab finds everyone worried. Pragya sheds tears and misses her other daughter. She wants to meet her and express her love. She shares her heart with Kiara. She doesn’t want to meet her daughter unless she learns her daughter’s wish. Prachi and Shahana come home. Shahana tells Pragya about Ranbir’s arrest.

Prachi tells about Maya charging Ranbir for molestation. Pragya knows Ranbir is innocent. She wants to help Ranbir, as she helped Rishi. Pragya meets Ranbir and shows her faith on him. He tells her that he is innocent. She knows it very well. She encourages him. She asks him to be strong, since his family is also with him. He thanks her for coming. He hopes Maya realizes her mistake. Pragya wants to get him freed. She tells that his truth is evident in his eyes. He asks if Prachi also trusts him. She tells him that Prachi also trusts him a lot. He is thankful for their trusts. She asks him to keep hope.

Rhea calls Aaliya to share the plan outcome. She tells Aaliya that Ranbir is still in the jail. She couldn’t defend Ranbir. She tells that Prachi has shown faith on Ranbir. Aaliya tells that maybe Prachi is supporting Ranbir for time being to return his favors. Aaliya makes next plans. She shares her plans and wants to put Ranbir in bigger trouble. Rhea gets worried. Abhi and Vikram arrange Ranbir’s bail. Inspector asks them to teach manners to Ranbir, who is a criminal. Abhi and Vikram scold the inspector for testing their patience. Abhi tells inspector that Ranbir is innocent. Abhi sends Vikram and Ranbir out. He takes the inspector’s class.

He advises the inspector not to drag Ranbir into the matter unnecessarily. Rhea meets Maya to share Aaliya’s next plan. She asks Maya to fake her death so that Ranbir can get blamed again. She asks Maya to fake a suicide attempt to blame Ranbir so that Prachi really loses trust on him. She tells that their plan didn’t work and now they have to take the plan to the next level. She tells Maya that Prachi will not let her die, she will stop her from suicide. Maya refuses to get to this level of madness. Ranbir gets to see Maya’s house. He tells Vikram about Maya. He asks Maya to stay outside. He wants to confront Maya.

Abhi also stops the car on seeing Vikram outside. Vikram tells that Ranbir went to confront Maya. Abhi doesn’t want Maya to blame Ranbir again. He rushes to stop Ranbir. Rhea worries when Ranbir reaches there. Maya stops Ranbir at the door. Ranbir confronts her for spiking the drink and framing her. Maya threatens to call the police. Abhi takes Ranbir with him. Rhea panics that even Abhi had reached the door. Abhi asks Ranbir to stay away from Maya. He tells that Maya will not tell him if he asks. He asks Ranbir to get smart and control his anger. Abhi turns surprising to hatch a plan against Maya and help Ranbir.

You summed it up very well. We give a very bad image for the youth of tomorrow. We chain the problem on problem but in the end my truth is not known. We want to abhigya together. It’s good at some point we have to stop 1500 episode. Worse Prachi sees only the negative side of being revived. His testimony can go against him. And in this case the credit goes to Rhea who orchestrated everything.