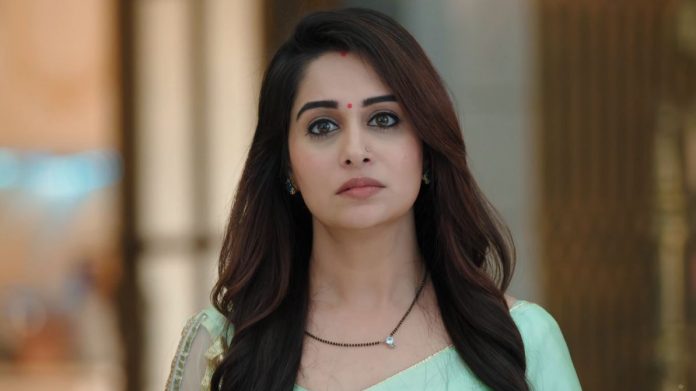 Kahaan Hum Starplus Naren suicide Sonakshi accused Suman is much worried for Pari’s future. She wants Pari to get married soon. She doesn’t care for anything. She just wants a nice guy who will take away Pari. She doesn’t want the tensions further. The police reaches home to arrest Pari based on Tanya’s complaint. This shocks Suman since the allegation is really cheap. Pari gets arrested. Sonakshi has no idea about the situation in her mum’s house. She tries to explain Rohit. Rohit ignores her. She receives a parcel for him and learns that he had prepared Veena and Naren’s divorce papers.

This shocks her. She doesn’t want Rohit to become the head of family and decide for his parents. She asks him how can he decide if his mum wants to keep the relation with his dad or not. She finds him dominating too much, as if he has the sole rights to decide. He tells that Naren cheated Veena and can’t be forgive. She asks him not to forgive Naren, but let Veena decide about her marriage. She doesn’t want Rohit to force his decisions on Veena. Rohit explains that Naren is unfaithful and doesn’t deserve Veena. He tells Sonakshi that she would also not like his affair and illegitimate child for sure.

Sonakshi understands his concern well, but asks him to give space to Veena. She feels Naren has been dutiful towards all the relations, he committed a mistake, but Veena shall decide. Rohit tells her that he will remove Naren from Veena’s life, since Naren is just a painful wound for Veena. Sonakshi refuses to support him and explains in his own medical language that he doesn’t remove a patient’s heart from the body if its wounded. She asks him to cure the problem. She knows Veena is much sensible and would think of entire family before deciding. He doesn’t listen at all. Rohan scolds Tanya for getting Pari arrested. Tanya wants Pari to pay a price for deceiving her. Tanya tells that she has no regret to punish Pari.

Rohan rushes to save Pari. He gets too worried. After a while, Rohit meets Veena and hands over the divorce papers. He tells that he got the papers prepared by Deepa. He wants Veena to sign on it and get free from Naren. He doesn’t want Veena to live in a faithless marriage. Veena is in dilemma. She doesn’t want Rohit to decide. Ajit informs them about the shocking protesters barging inside the house. The NGO women have got informed about Naren’s characterless deed. They barge in Sippy mansion to punish Naren by taking laws in their hands. Sonakshi tries to stop them. The ladies don’t listen to her and ask her to judge her fraud father-in-law. They ask Sonakshi to do justice, since she is Parvati.

Sonakshi fails to save Naren. Naren falls in huge trouble when the ladies try to blacken his face. Veena shoots in the air to stop the ladies from the worst step. Veena defends her husband. She tells them that she will decide about Naren and her relationship. She doesn’t want anyone to interfere or lead her. She tells that Pooja also has the right to decide about Naren. She doesn’t want anyone to call Pooja illegitimate. She saves him from the crazy protesters. Naren thinks she has forgiven him and thanks her.

Veena tells that she didn’t forgive him, she is just keeping her family united, she will decide on their marriage. Sonakshi asks Rohit to let Veena decide, which will be the best for her. She tells that she understands Veena’s emotions. Rohit doesn’t want to give a second chance to anyone. He tells that he loves his family a lot, but can’t forgive anyone so easily. Rohan helps Pari and clears her name. He drops Pari and Suman home. Suman thanks him and asks him to never meet Pari again. She gets rude towards him. He tells that he loves Pari a lot. Suman calls their love a sin, since he is already married to Tanya.

Rohan tells her that he doesn’t love Tanya. Suman asks him to divorce Tanya and then marry Pari, if he really loves Pari. Rohan agrees to her. He doesn’t want to leave Pari ever. Pari feels Rohan really loves her. Suman doesn’t think that Rohan will be loyal to Pari. Moreover, Naren gathers the family for a meeting. Sukhmani joins the family and learns the matter about Naren’s past. Sukhmani tells them that Naren decided something and she has approved it too. Naren apologizes to Veena and Pooja, since he has hurt them a lot by his big mistake. He tells that he has named his assets to Veena and Pooja, so that he can secure their future.

Rohit and Ajit have no objection. They don’t care for the money. Naren gets support from the family. Veena doesn’t like him compensating his mistake by giving his share. He tells that he will sign the papers in front of them tomorrow. Nishi is worried since she wanted to get Naren’s property. Nishi wants to confront Naren. Rohan barges into the house and reprimands Tanya for accusing Pari so badly to get her arrested. Sonakshi learns that Tanya had jailed Pari for the charges of prostitution. Tanya feels Pari is nothing but a mistress for Rohan. She doesn’t have any regret for filing the charge. Sonakshi worries for her sister.

She tells Tanya that she did wrong with Pari. Rohit agrees with Sonakshi on this front. Rohan wants Rohit to stay out of his matter. Rohan declares that he wants to divorce Tanya. Veena yells on Rohan for his madness. She supports Tanya. She wants Tanya to be strong. She doesn’t want Sippy men to torture their wives by the infidelity. Rohit tells Sonakshi that if Rohan’s marriage breaks, then their marriage will also be affected. Sonakshi gets under pressure. Nishi confronts Naren for giving the property share to Pooja. She feels she lost everything.

She confesses her evil intentions. During the argument, Nishi pushes Naren off the balcony to kill him. Nishi blames Sonakshi for Naren’s deadly state. Naren is rushed to Sippy hospital. She tells the family that Naren attempted the suicide, and Sonakshi is the person who has driven him to this helpless point. Rohit and Veena are in bigger shock with Nishi’s accusation on Sonakshi. How will Sonakshi prove that Naren’s assumed suicide is actually a murder attempt by Nishi? Keep reading.

This ridiculous “twist” in Nishi’s character is awful and completely unconvincing not to mention illogical. Also this sort of thing isn’t believable at all. Forget about reality this drama is nothing but another illogical show on Indian TV. I have stopped watching because with Nishi acting all these years and turning killer this show has surpassed all levels of idiocy.

Reviewed Rating for this particular episode Kahaan Hum Starplus Naren suicide: 2/5
This rating is solely based on the opinion of the writer. You may post your take on the show in the comment section below.