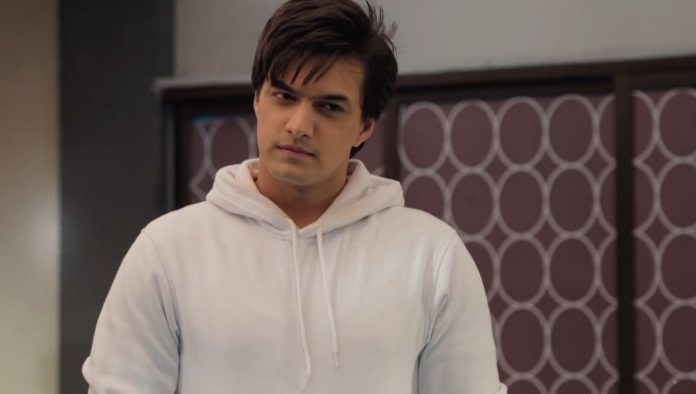 YRKKH Tonight Kartik rages on Lav Kush big blunder Kartik and Naira get stunned seeing the lovely decorations in the hotel. She gets shy and wonders the odd feeling because of Kartik’s presence. Kartik is thankful to her that she accepted him back in life. Kartik and Naira plan their romantic time. Lav and Kush cheat in the game. Trisha sees Lav cheating and tells everyone about his move. Lav gets angry on her. Kartik and Naira miss Kairav a lot. They call home to know about him. Suwarna tells them that Kairav is playing with the family and isn’t missing them. She asks them not to talk to Kairav and remind that they are away from home. Suwarna gets surprised when she finds Kairav getting stubborn to go to Naira.

Kairav wants his mother with him. He cries for Naira. The family tries hard to pacify him. Kairav doesn’t listen to anyone. He insists that he wants Naira. Suwarna gets helpless to call Naira. Kartik and Naira enjoy their time, which soon breaks by the family’s call. Kairav calls them home. He tells that he is missing Naira a lot. Kartik and Naira realize that they are parents first and rush home for Kairav. They arrive home and find Kairav sleeping. Suwarna apologizes for not being able to handle him well. Kartik and Naira miss their alone time. They decide to do their duties as parents and also keep their marriage merrier.

They plan their romance for some other day. They are happy that Kairav is in their lives. Elsewhere, Lav and Kush are worried that Trisha will tell their truth to Naira, since she didn’t even hide their small mistake in the game. They don’t want Naira to know anything. They meet Trisha and apologize. Naira catches them going to Trisha and follows. She asks the matter. Trisha reveals about Lav and Kush troubling her on the way. Kartik too learns the matter. Kartik and Naira reprimand Lav and Kush for their bad act.

Lav and Kush get helpless to lie to save themselves. They come up with an instant story to cover up their mistake. Trisha wonders if Lav and Kush really didn’t intend to trouble her. Lav and Kush don’t want any outsider to weaken their place in the family. They don’t think she can do any harm to them, since she is a poor ashram girl. Trisha doesn’t want Kartik and Naira’s special day to get spoiled because of her tensions. Kartik and Naira feel sorry. They want to make sure that Lav and Kush are walking on any wrong path. Kartik and Naira have a moment. They rush Kairav to his school. Dadi prays for the family peace.

Manish knows her aim to secure the family. He also prays with Dadi. Kairav and Vansh want to spend time with Lav and Kush. Trisha practices dance in her room. The music disturbs Lav and Kush a lot. Lav gets into an argument with her. Trisha finds him a big liar. Kairav catches Lav and Kush smoking. Kartik and Naira learn the matter, when Kairav is found with a cigarette. Kartik will punish Lav and Kush for spoiling Kairav and Vansh.

Best comment by Dipti Shelke:
I want see kaira as a main lead. No can take a place of them. Please writer you should write stories put kaira as a center.