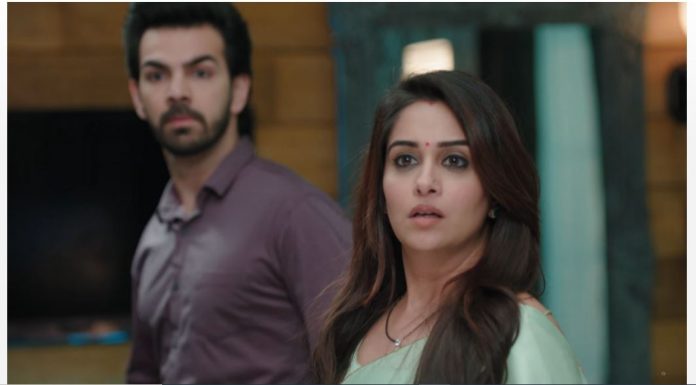 Kahaan Tonight Starplus Preview Ronakshi Breakdown Sonakshi tries to talk to Suman. She asks Suman why is she avoiding her this way. Suman doesn’t want to talk to her anything regarding Pari. She disconnects the call. She shows her anger towards Sonakshi. Sonakshi wants to personally meet her and sort the issues. Sonakshi overhears Akash’s grievances about Naren’s decision to give the property solely to Veena and Pooja. Akash feels the decision is unfair, since his dad gave the property to Naren, because it could help Naren in his profession. He tells that Naren doesn’t have any right to give his dad’s property solely to Veena, even if Naren is covering up his mistake by the huge compensation.

He wants his own share. He wants to know who gave Naren the rights to give away the property. He shares his concern with Deepa. Deepa pacifies Akash who isn’t wrong completely. Sonakshi too agrees with Akash. She thinks Naren has to consider everyone and divide the property equally. She wants to talk to Rohit about it. Akash wants to talk to Naren and ask for his share. He goes on to say that he will file a legal case on Naren if the latter disagrees. He wants the family to get their shares equally. Sonakshi rushes to meet Rohit.

She doesn’t want the Sippy family to break. Rohit gets emotional when he watches his wedding recording. He misses his Sona. He wanted things to be merry as they dreamt. He recalls their beautiful moments. All of his dreams broke because of the on going family tension. Sonakshi meets her. He avoids her by stating work. She tells him that she shall wait for him to finish the work and then talk. She waits for hours. He doesn’t want to talk to her. She takes an appointment. She tells that this was the only way to meet him.

She tells that the property matter will break the family. She warns him. He doesn’t listen. He asks her to stay away from his family matter. She feels Sippys is her family also. He ousts her from his cabin. Rohan packs up his stuff to leave Tanya. Tanya threatens him of dire consequences if he divorces her. She tells him that she will claim all her rights on him, she will leave him in a poor state by snatching everything from him. She asks him to think again about his madness for Pari, which will leave him ruined.

She threatens of the legal cases she will file on him to ruin him completely. Rohan gets tensed. He wants to commit to Pari whom he loves. He doesn’t want to lose everything because of Tanya’s anger. Pari tells Suman that Rohan loves her and will surely come. She calls Rohan. When he hangs up the phone, Suman tells Pari that Rohan is also a fraud like Naren.

Best Comment by A random:
The charm has indeed been lost. The show was much better and and fun loving earlier with sona quitting her job and all this is going in the wrong direction. The actors are wonderful but what about this ploy now ridiculous.