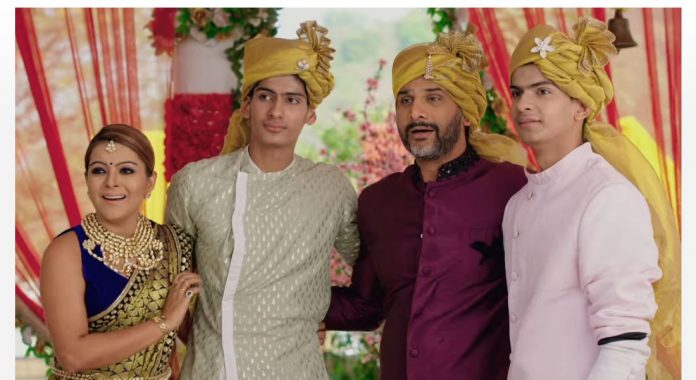 Yeh Rishta Good news boosts Goenkas celebrations Kartik gets bored on the way to the school. He feels sleepy. Kairav asks him not to sleep at his school in front of his eyes. Naira laughs on Kartik. They meet Kairav’s teacher. Manish wants to have some fun with Lav and Kush. He likes their idea of a bike race. He wants to enjoy his young days. Dadi laughs seeing Manish’s excitement. Manish tells them that he is still young. Kartik and Naira return home and make sad face to play a prank. Kairav tells them that they are just doing a drama. Kartik and Naira tell the family that Kartik got the best student award.

The Goenkas get happy and praise them. Gayu is happy with Dadi counts Vansh in Goenka family. She always wanted Vansh to get acceptance as Goenkas. The family praises Kairav and Vansh and want to reward them for their good conduct. Kairav and Vansh ask for a bike ride. Lav and Kush avoid the kids and make excuses. Kairav looks for them to play. He finds Lav and Kush smoking. He questions them further. Lav handles Kairav well. He asks Kairav to keep the secret if he wants to become his friend. Kairav agrees to them.

Naira calls Kairav. She gets the cigarette smell from his clothes. She finds it odd. She shares her doubt with Kartik. Kartik tells her that no one smokes in their house. The staff gives a pack of cigarette found from Lav’s clothes. Kartik realizes that Lav and Kush started smoking. Naira confronts Lav and Kush right in front of the family. Lav and Kush get scared and lie. They deny the blames. They ask Surekha to help them. They make Kairav lie to the family. Kairav lies for the first time. The elders question Kairav and ask him not to be scared. Kairav still lies cleanly.

She wants to celebrate Lav and Kush’s coming. Lav feels Trisha is taking revenge and filling Naira’s ears. He tells Kush that Trisha is mean and he will settle scores with her on the day of her dance performance in Naira’s academy. He tells that Naira is organizing a dance competition, he will make sure that Trisha doesn’t win. He wants revenge on her. Kartik and Naira ask Lav and Kush to join them in a basketball match. Trisha also joins on Naira’s insistence. Naira and Trisha give a tough competition to the boys team. Kartik loses to Naira. Lav falls because of Trisha. He tells Kush that Trisha has done this purposely.

Kush doesn’t think so. Trisha taunts Lav for losing. Lav gets angry on her harsh comments. Lav vents his anger on Vansh. Vansh gets too upset, but Kairav cheers him up. Samarth gives the good news to the family. He tells them about Gayu’s pregnancy. The Goenkas get too happy. They all congratulate Samarth and Gayu for their new baby coming. Vansh is happy to get a sibling. The Goenkas sing and dance as always to celebrate their happiness. Kairav also wants a sibling. He demands Kartik and Naira to give him a little sister. Kartik and Naira sink in sorrow while recalling their little daughter, who died after the delivery.