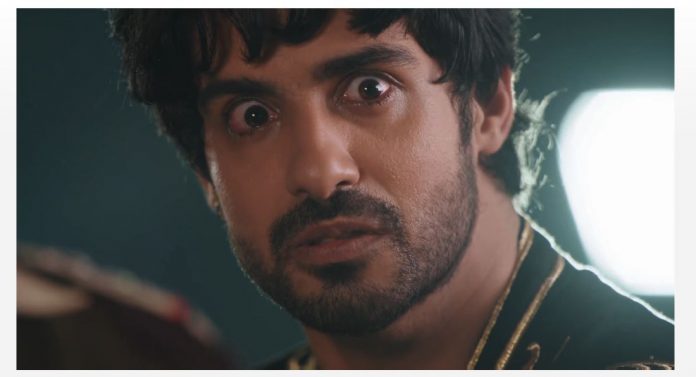 Starplus Chahatein Rudraksh Prisha Revenge track begins Prisha questions Yuvraj about Rajeev’s worst condition. Yuvraj lies to him that he didn’t see Rajeev in front of the car and the accident happened by mistake. They hear the police siren. She asks him who called the police. He lies that he called the police, since he is a responsible citizen, who recently became a judge. He cries that his career got ruined. He tells her that he wanted to keep Saransh and her happy by giving them much love, he wanted to be a dutiful son for her parents. He tells that everything got ruined because of Rajeev. He tells that there won’t be anyone who could save him from the blame. He instigates her emotionally.

Prisha reacts and goes to his car. She sits in the car and takes the blame to save him. He gets glad that his fake tears worked. He asks her to get out of the car before police comes. She doesn’t listen. When the police comes, she accepts that she has done Rajeev’s accident. Yuvraj acts good in front of her. She wants to save Yuvraj. He lies to her that he will save her soon, since he is a judge. He feels she loves him a lot and took the blame over just to save him. Saransh has lost his way. He wants to go back to Prisha.

A child kidnapper finds him alone and tries to lure him by sugary talks. Saransh doesn’t want to talk to any stranger. The kidnapper gets after him. Saransh runs to save himself. He recalls Prisha’s teachings and bites the kidnapper’s hand. He manages to escape. Rudraksh looks for Rajeev and follows the GPS. He gets to the accident site. He finds Rajeev there and is shattered. He can’t believe that Rajeev is dead. He doesn’t want to accept this. He acts normal and talks to Rajeev. He hopes for his response. Inspector tells him that Rajeev won’t get up, he is no more. He consoles Rudraksh. Rudraksh is broken down.

He shouts on the fate which snatched his brother. He enquires about the accident. He learns that Prisha is responsible for the accident. He loses control and threatens to kill her. Prisha is too scared of his anger, knowing its justified. Yuvraj protects her. He tells that its just an accident. Rudraksh vows to ruin her. Prisha gets arrested and taken to the police station. She meets her family there. Rudraksh returns home with the bad news that Rajeev is dead. His parents get a huge shock on hearing this.