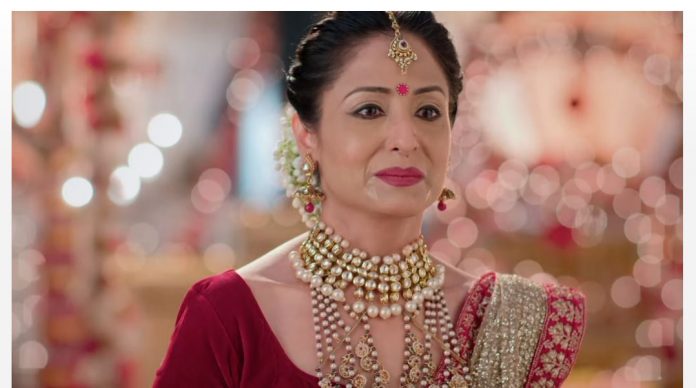 Rishtey Pyar Rajshri shocking confession Mishbir twists Nannu lies to Meenakshi about Abir. She doesn’t get any help and goes to find Abir. Kuhu finds him worried. He goes to take his place in the mandap and awaits Mishti. He doesn’t want Mishti to learn his truth and hate him. The Maheshwaris learn that Mishti has left the house. They wonder where she went. Mishti leaves a letter for them. Nannu reads her letter and learns that she has gone to meet Abir. Rajshri tells them that Mishti loves Abir and they can never change this truth. Mishti feels Abir isn’t well. She wants to find him. Rajshri tells Vishwamber that they couldn’t fulfill their duty by bounding Mishti into this relation.

She tells that she has sent Mishti to Abir, who taught Mishti to love freely. She tells him that they have caged Mishti by the burden of their favors. She feels sad that Mishti was willing to marry Nannu for returning their favors, which means that they failed to be her family. She wants to give freedom to Mishti so that Mishti can achieve her happiness. She doesn’t want Mishti to return to them. Vishwamber asks her if she thought of Nannu once. He tells that they have to think about every relation, not just Mishti alone.

They have different opinions. Vishwamber supports Nannu, who always ensured Mishti’s happiness. Rajshri tells that Mishti’s real happiness is with Abir. Vishwamber apologizes to Nannu. He doesn’t want Nannu to drink or take drugs again. Nannu feels sorry to lie to instil fear in their minds. He knows his family will hate him on knowing his big lies. The doctor calls for an ambulance to shift Abir to the hospital. He checks the medical report and thinks he is Nishant Maheshwari/Nannu. The doctor gives him heavy dose of medicines thinking he is a drug addict. He asks the saints to make him take good rest to recover until the ambulance comes.

Abir soon gets conscious and is confused hearing the doctor’s words. He tells them that he isn’t Nishant, but Abir. Doctor tells him that since he is on heavy dose, he needs rest. He advises Abir not to go anywhere. Abir wants to go to Mishti. He tells the saint that his love is like worship, he can’t leave his love story incomplete. He fears that Mishti will marry Nannu. He wants to rush to Maheshwari house and stop the marriage.

Mishti tracks Abir by his app and goes to the lake. Mishti learns about the car accident. She runs to the lake. Abir leaves from the lake to meet Mishti. Nanu informs Vishwamber that Mishti has come home. Vishwamber wants to go and bring Mishti back to get her married to Nannu. Rajshri doesn’t support his aim. She wants to give freedom of choice to Mishti. Nannu doesn’t want Vishwamber to hate him. He misleads the family so that his truth doesn’t come out. Mishti searches for Abir. Abir drives the ambulance to reach Mishti. Mishti meets the doctor, who tells her about Abir’s serious condition. He tells that Abir has gone to his lover.

He guesses that she is the girl whom Abir wanted to meet. Mishti learns that Abir’s life is in danger. She struggles to reach Abir before any bad happening. Mishti senses Abir is at the temple. The lovers meet at the temple in a dramatic way. They confess love to each other and unite. The families reach there while looking for them. They get to see the Mishbir moment. Will Nannu get away from Mishbir’s lives? Keep reading.