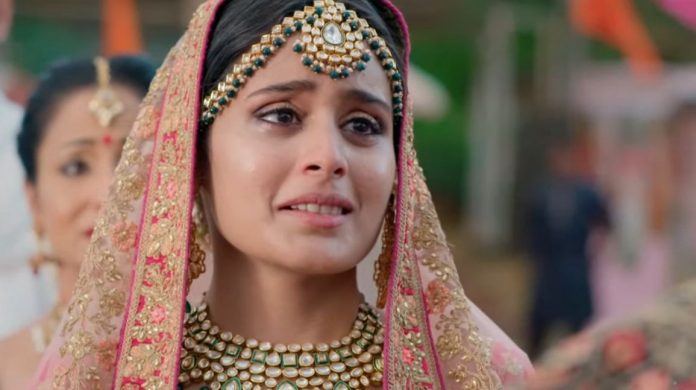 Rishtey Starplus Upcoming Mishti huge confession Mishti searches for Abir. She realizes that he has left in the ambulance. She calls Kunal and informs about Abir. Kunal and Meenakshi also look for Abir. They have a close hit and miss with Abir. Kunal tells Meenakshi that Mishti can never miss to find Abir, she will surely reach Abir. He tells that they will track Mishti and reach Abir. Meenakshi doesn’t think Mishti will tell them the truth. Kunal tells that he believes Mishti is Abir’s well wisher, and she proved this by leaving her marriage for finding Abir.

Abir drives off the ambulance in the high dosed state. He feels he couldn’t lose out soon and reach Mishti some way. He wants to tell her Nannu/Nishant’s truth and save her from the big cheat. He knows that Mishti doesn’t love Nannu and can never be happy with him. Abir manages to drive to the temple. He wants to meet Mishti at her house and stop the wedding. He stops at the temple to get into a stable state and also make prayers for his love to succeed. Mishti madly looks for Abir on the scooter she took from some stranger by giving her precious jewellery.

She misses to see the ambulance outside the temple. She still feels that she missed the clue. She returns to the temple area with a feeling that Abir might be close. She wonders if he has gone to her house. Abir recalls his proposal to Mishti. He wants to tell her that Nannu is lying to get her love and cheating entire family. He doesn’t want to do the same mistake like Mishti had hidden Mehul’s truth from him. He wants to be true to Mishti, but also doesn’t wish to break her heart. He continuously rings the temple bell, which reaches Mishti’s heart. She feels Abir is close. She shouts his name aloud. Abir hears her call.

Abir and Mishti come face to face. Their yearning ends. Meenakshi wants to see Mishti later. She prays that her son is fine. Abir and Mishti have a lovely hug and are happy to meet. She tells him that she wants to elope and marry him, she can’t stay away from him. She tells about her strange feeling that he was in danger, which made her leave her house and search for him. He asks her if she has left her marriage and came to find him. She tells him that she took Rajshri’s permission and left from the house. Abir promises her to never leave her. She wants him to take her to a place where they can stay without any family tension. Abir gives her an assurance with love.

Both the families reach there and get angry to see them together. Nannu demands Abir to leave Mishti. Abir and Nannu want Mishti in their lives. Nannu jerks off her hand and hurts her. Abir leaves her hand to give her a relieve. Vishwamber reprimands Nannu for hurting Mishti. Jasmeet adds up the drama by a huge argument with Mishti. She insults Mishti for not living up to her promise. She wanted Mishti to keep Nannu happy. She accuses Mishti for breaking their hopes. Mishti is helpless, since she loves Abir. Vishwamber asks Mishti if she loves Abir. Rajshri and other family members join them.

Rajshri wants Vishwamber to listen to Mishti’s wish. Vishwamber tells that Abir isn’t right for Mishti, since he couldn’t keep his promise. He can’t expect anything from Abir’s family. He reminds how Meenakshi always threatened Mishti. Abir feels sorry for his mum’s actions. Mishti gets speechless and apologizes to her family. Jasmeet taunts her for being a stain on Maheshwari family. She feels Maheshwaris did a big mistake by adopting her. Mishti tells that she always had the fear that they will regret to adopt her. She didn’t wish to see this day. She justifies Abir’s decision to leave her. She doesn’t mention Meenakshi’s mistake to her family.

She tells that Abir values his relations more than his own happiness. Abir asks for a chance, since Mishti loves him. Jasmeet tells Mishti that her apology won’t work. Mishti tells them that Abir met with an accident and she had to be with him. She apologizes to Nannu. She reminds him the promise that he will help her complete her love story with Abir. She tells that she can’t bound Nannu in a loveless marriage, since he doesn’t deserve this. She wants him to be happy. She tells him that she may marry him, but can’t guarantee their happiness, she will never be able to love him. Nannu questions her love for Abir.

Mishti confesses that she loves Abir. Nannu relieves Mishti from the marriage promise. He just wants her to be happy. Meenakshi regrets her actions. She thanks Mishti for saving Abir’s life. Abir and Mishti’s alliance gets fixed when Meenakshi apologizes to Mishti and heartily accepts her. She promises Vishwamber to keep Mishti so happy that Mishti will be the world’s luckiest bahu. Vishwamber suspects Meenakshi’s intentions and alerts Mishti.