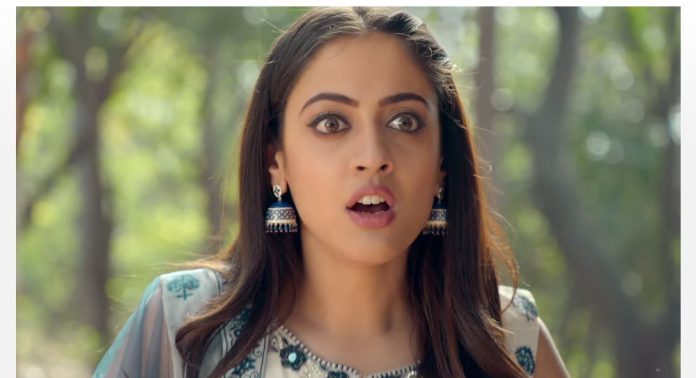 Starplus Jadu Hai Upcoming Roshni fights new evil Aman tells Roshni that he can’t trust her. Salma taunts him that he should trust Roshni if he loves her. She tells that Roshni blindly trusts him. Aman, Roshni and Aliya look for the baby everywhere possible. They get a hint from Baazigar, who guides them to the black jungle, where Parveen has taken the baby to sacrifice and gain her powers. Parveen turns evil. Aliya realizes that her lie has turned true, her baby is in real danger. She wishes that the baby stays fine. She sends the snake to find him. Parveen reaches the Jinn cave to send the baby inside and regain her lost powers. She calls upon the Jinnat to send the baby.

The snake tells Aliya about the baby’s whereabouts. Aman feels the baby is really in danger, since he is inside the black jungle. Aliya tells him that she knows which direction to go, since its her instincts. Aman wants to listen to her. Roshni opposes her and wants to go her way by using her powers to get a direction. Aman and Aliya rush to find the baby. They get obstructed by a huge tree falling in their way. Aman realizes that they are on the right path, since the hurdles signify this. Roshni reaches the baby first and finds him in huge danger. Parveen sends the baby towards the cave. The baby swims in the basket and goes across the river.

Aman uses his magical powers to get rid of the hurdles. He asks Aliya not to be stunned and hear his explanation later. She realizes Aman’s Jinn powers. Roshni calls them to save the baby. Aman and Roshni try to save the baby by their powers at once. Parveen doesn’t lose so soon and provokes the cave to attack Aman. On the other hand, Tabeezi learns about the baby’s kidnapping. She checks about Parveen. She learns that she isn’t at home. She suspects that Parveen has gone to sacrifice the baby. Parveen attacks Roshni and injures her. Aman resists the cave pulling him. Aman is the King of Jinnat.

The cave gets destroyed before swallowing Aman. Aman rescues the baby. Aliya realizes his superpowers and wants to be with him. Roshni learns about Aliya’s supernatural side. She is much disturbed and confronts Aliya. Roshni and Aliya will be having a huge battle.