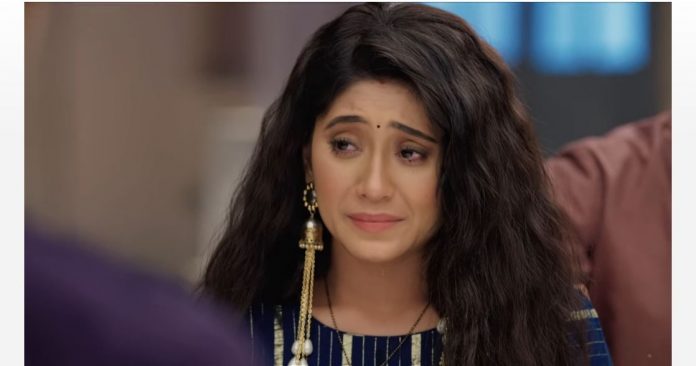 Yeh Rishta NEW Starplus Terrific shocker for Naira Naira gets too terrified when she gets to see Trisha’s clothes with blood marks. She feels guilty that she couldn’t save Trisha from the accident. Kartik hugs Naira. She doesn’t want to see the clothes. Kartik sends the nurse away with the belongings. He enquires about the phone. Inspector tells him that he didn’t get phone at the accident site. Kartik tells that the phone wasn’t left in the academy. Inspector tells that he will get the phone tracked. Kartik wants some clue about the culprits. Naira breaks down. Kartik wants to take her home.

Inspector tells them that he will be going their home to speak to the family. Soon, the police arrives in Goenka mansion to know about Trisha more. Inspector speaks to everyone and gets inputs that may help them nab the culprit. Manish and Akhilesh are too disturbed that Trisha met with an accident. They want the culprit to be punished. Lav and Kush avoid the police. Lav fears that Kush will speak up in guilt and put them in trouble. He asks Kush to not react and just hide until the police goes away. Inspector assures that Trisha’s culprit will get caught.

Maeanwhile, Kairav tells Vansh about Lav hiding the chips packet cover underground, as if he is sowing it to make its tree. Vansh doesn’t believe him. He goes to ask Lav himself. Kairav asks them about the chip wrap plantation. Vansh asks if its true. Lav lies to them about his science project. He tells that he wishes to get his bike soon. He convinces the kids by his story and makes them promise that they won’t share this with anyone. Kairav and Vansh agree to him.

Later, Naira tells Kartik that they shall meet the truck driver to ask about the culprits. The truck driver doesn’t know about the culprits. When they meet him and ask about the accident, he tells them that Trisha had intentionally come in front of the truck to end her life. He regrets a lot and apologizes to them. Kartik and Naira feel he isn’t lying. They want to go deeper into the case and find the truth. Naira doesn’t feel that Trisha will attempt suicide.

Kartik and Naira come home in broken state. Kartik tells them that Naira didn’t wish to come home and is crying since long. Naira tells him that she wants to stay with Trisha at the hospital.

She is much disturbed knowing Trisha was molested. She breaks the shocking news to the family. She tells them that Trisha was molested and police suspects her to make the suicide attempt. Goenkas are shocked to know this. They realize Trisha’s pain. Dadi and other women cry and feel sorry for Trisha.

Kush feels guilty with the way Naira is broken down. The family consoles Naira. Naira tells them that she had to keep her responsibility, but she badly failed. She blames herself. Kartik and Kairav take care of Naira. They don’t want her to cry. Kairav puts her to sleep. Kartik wants her to rest for a while. Kush can’t see Naira crying. He tells Lav that they will tell the truth to the family. He has realized his mistake and regrets a lot. Lav doesn’t want him to admit anything and put themselves in trouble.

He tells Kush that they can’t ruin their lives to get rid of guilt. Kush doesn’t listen to him. Abhishek reaches there and stops Kush from going to the family. Naira wakes up on getting the inspector’s message. He sends her the locket picture and mentions that it may belong to the culprit. She informs that the locket isn’t of Trisha. She wants to find the culprit by using the clue. She happens to see Abhishek wearing a similar locket. She enquires about it. Abhishek lies to him. He is glad that he didn’t get caught.

Consequently, Surekha overhears them. She feels Naira is suspecting the boys in Trisha’s case. She shouts aloud and gathers the entire family. She reprimands Naira for blaming her sons. Dadi asks Naira not to suspect their family boys. Naira denies the blame. She tells them that she didn’t doubt Lav and Kush, she was just getting information about the locket. Surekha tells them that Naira doesn’t trust them and started questioning too. Kartik understands Naira well. Naira tells them that she can never think if suspecting Lav and Kush. Kartik defends Naira. He wants Surekha to end the matter. Surekha apologizes to them in a taunting manner.

She doesn’t want anyone to blame her sons. Naira apologizes to Lav, Kush and Abhishek. Lav asks Kairav to get a gold necklace. Naira understands Lav’s plan and confronts him about the necklace. Surekha doesn’t want Naira to target her sons always. Naira grows suspicious about Lav and Kush.