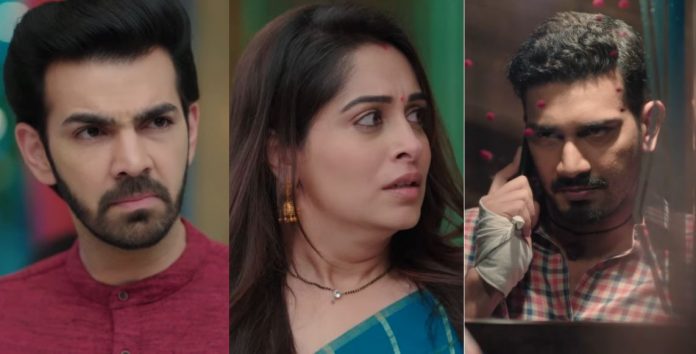 Kahaan Hum Starplus Mahesh dark mysterious reentry Sonakshi gathers the family for a serious revelation. She tells the family that Nishi is the culprit responsible for Naren’s state. She exposes Nishi’s truth that she is the person who attempted to kill Naren mercilessly. The family goes in shock with the cheapest blame ever on Nishi. Yash counts Nishi’s numerous favors on the family, since she has chosen to stay in her Maayka for her love for the family. He tells that Nishi loves and respects Naren so much that she has adopted Pooja to cover up Naren’s mistake. He doesn’t think that Nishi can be a criminal.

Pooja also defends her mom, who has given her a respectable life in the society. Sonakshi tells them that Nishi’s adopting move is just a good pretense, since Nishi’s motives are something else. Veena, Akash and Rohan feel Sonakshi has gone totally mad to blame Nishi. They ask her the crime motive. They want to know what proof does Sonakshi have that she is making such serious allegations. Sonakshi tells them that Nishi has taken this shocking move just for the sake of property, since she is the second executor if anything happens to Naren. Ajit supports Sonakshi, knowing that she is selfless.

Nishi plays an emotional card. She tells them that she will leave the house if Sonakshi wants, she will also accept the blames for the family peace sake. Veena asks Sonakshi to stop blaming Nishi. She is fed up that Sonakshi is breaking the family. Sukhmani gets speechless on the matter. Veena supports Nishi. Sonakshi pleads Veena to trust her. Rohit makes a timely entry and declares that he trusts Sonakshi. He tells that he is upset with Sonakshi for hiding about the prenuptial agreement, but that doesn’t mean that they cut down her voice. He wants to give her a choice to prove her innocence. He asks Sonakshi to tell him what does she want to say.

Veena asks him if he is also doubting Nishi. Rohit knows Nishi well. He wants Sonakshi to provide the evidences. Nishi is scared seeing Rohit and Sonakshi’s strong bond. Sonakshi tells them that she has given the evidences to the police inspector. She wants to call him home. Rohit asks her to go ahead. Veena doesn’t want more defamation. She asks Rohit to come back to senses and not call the police. Rohit wants the truth to come out. Veena asks him to better remember the consequences. She keeps a condition that he will just obey her terms if Sonakshi fails to prove anything. Rohit takes the big risk and agrees to the condition. Sonakshi is also confident.

She calls the inspector, who has already been targeted by Nishi and Mahesh. Nishi gets Mahesh released from the jail and hires him for her motives. She promises to get Sonakshi to him. Mahesh attempts to kill the inspector. Post accident, he leaves the injured inspector on the road. When Sonakshi’s incoming call gets spotted by Mahesh, he answers and informs about the accident. Nishi asks Sonakshi to blame her for the accident too. Sonakshi realizes that Nishi has indeed planned this, to save herself from getting exposed. Sonakshi tells Rohit that the inspector was getting the crucial evidences to show them and met with an accident on the way to Sippy mansion.

She doesn’t think its any coincidence. Rohit starts believing Sonakshi. But, he needs to prove it to his family too. Nishi and Veena get verbally firing at Sonakshi. Mahesh takes the evidences with him. He informs Nishi that he holds the evidences safe. Nishi acts innocent. Sonakshi tells them that she had seen Nishi being a left-hander. She also doubts on Yash, which angers him. She tells that Nishi has forged her signs and also pushed Naren. She tells about the video clip, which shows a left-handed person pushing Naren down the balcony. Rohit wants to see the clip. Sonakshi tells him that even the girl who shot the video has it in her phone.

She gives him the girl’s address. Rohit and Akash rush to meet the girl. Nishi informs Mahesh about the second evidence to clear up. Mahesh reaches the young girl and threatens her enough. He sends the girl away and also bribes the security guard to lie to Rohit. Rohit comes back home without any proof. He tells Sonakshi that the guard stated about the girl’s absence since many days. Sonakshi tells him that she has met the girl herself. She can’t believe that the girl is missing. She wants Rohit and Veena to believe her.

Mahesh informs Nishi that the girl is sent away. Yash scolds Sonakshi for framing Nishi. Rohit takes a stand for his wife. Rohit and Yash get into a big argument. Sonakshi asks Rohit to accompany her to the police station to find out the truth. Rohit agrees to bring out the truth. Nishi emotionally blackmails them. She tells Rohit that she can’t tolerate the humiliation and loss of faith. She tells that she will give up her life and prove her innocence. She plays the suicide drama and is rescued by the family on time. Nishi is happy to outsmart Sonakshi.

Ajit stays back with Sonakshi. He still believes her. Nishi recalls her smart plan to win the family’s sympathy. She calls Mahesh to thank him. Mahesh just wants Sonakshi, not any money. He reveals about his plan to send the girl away for some days. He doesn’t think Nishi will be caught. She promises to help him in his goals. Mahesh gets desperate to get his Parvati. Nishi fears of Rohit knowing her truth. Will Nishi get exposed or will it just be her nightmare? Keep reading.

Best Comment by Jowhari khan:
I am sure Ronakshi will reunite soon and this Rohan issue must come to end again Sonakshi will be targeted because of this Pari.