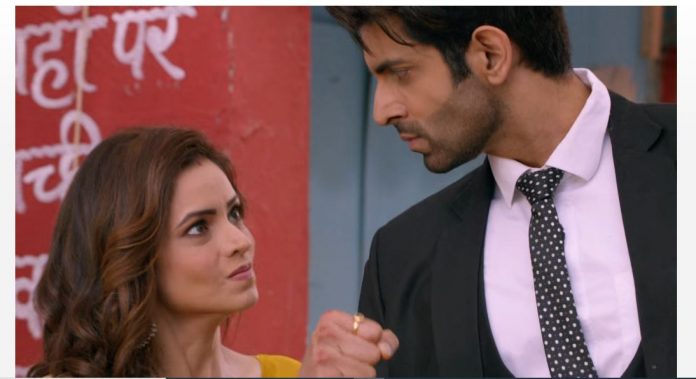 Kasautii Starplus Accident Twist Viraj Komolika Prerna Anupam reaches Anurag to get his signs on the legal documents. Anurag asks Prerna not to take stress. He signs the papers and asks Anupam to go. Anupam finds something fishy. Anurag and Prerna get stuck when Viraj comes there. Viraj also looks for Prerna. He learns that Anurag is in trial room. Prerna doesn’t want to get caught this way. Mohini and Nivedita buy rings. Om tells them that Anurag has bought the best ring for Prerna. Mohini tells that Sonalika is her Bahu. He tells that Anurag with a pregnant lady. Mohini fumes knowing Prerna has got a diamond ring from Anurag as well. She goes to confront Prerna. She asks Anupam about Anurag.

She goes to the trial room. Veena gets a saree for Prerna. Prerna wants to leave, but Veena sends her for trial. Anurag asks Prerna to go ahead and try the saree. Prerna tells him that she will make excuses. He asks if baby is angry on him. She tells that the baby is excited that they are together. They have a moment when the light goes. He assures that he is with her. Mohini asks Veena about Prerna. The duo get into a heated argument, which gets overheard by Anurag and Prerna. Anurag feels bad hearing the quarrel. Prerna knows that its normal that they always fight. Mohini wants Prerna to come out and talk to her.

Anurag asks Prerna to forgive him. He gets into flashbacks. He recalls his engagement. He tells that he won’t let her get embarrassed. He wants to protect her dignity. Komolika tells Mohini that Anurag is inside the trial room. Mohini gets angry that Prerna is with Anurag. Anurag jumps over to run. Prerna meets Mohini and Veena. She acts that she was alone. Mohini thinks where did Anurag go suddenly. Anurag bumps into his doctor and pays him much respect. Doctor feels guilty and stops him to reveal Sonalika’s truth. Anurag misses to hear the truth since he sees Jagga at the same time. He chases Jagga and asks Viraj to help.

Viraj runs after Jagga, while Anurag stops on Prerna’s call. Prerna feels unwell. Anurag takes Prerna and her family home. Komolika gets much upset. Mohini understands her. Viraj stops Jagga and brutally bashes him up. He angrily questions Jagga over his failure to kill Prerna. He wanted Prerna dead. Komolika reaches Viraj to calm him down. She asks Viraj not to call Jagga. Viraj and Komolika are together in the plan to kill Prerna. She asks Jagga to get away from their sight. Viraj gets enough of the plans. He tells that he has worked hard to help Jagga, he misled Anurag and police, even then Jagga failed.

He gets into his good pretense again and informs Anurag that he is coming to Prerna. She asks him to stay with Prerna. Viraj fakes promises to Prerna. Anurag is also protective about Prerna. Komolika assures that she will kill Prerna before the engagement. She makes a vicious plan to kill Prerna in a car accident. Prerna isn’t aware of the upcoming danger posed by Komolika and Viraj. Viraj will soon get unmasked by Anurag. Prerna sits in the car, unknown of the failed brakes. How will Anurag save Prerna’s life this time? Keep reading.