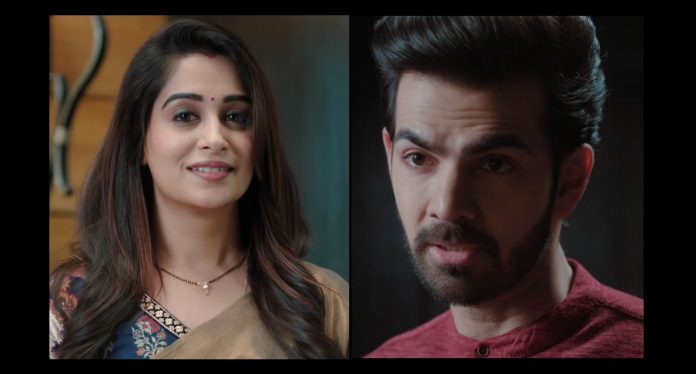 Kahaan Hum Promo NEW Divorce Sonakshi slaps Rohit Rohit misses to be on good terms with Naren. He wishes Naren to recover so that they have a good father-son bond. Veena meets Rohit and asks him to go. She sits with Naren. She asks Deepa to prepare the divorce papers soon. Rohit goes to his cabin. Sonakshi is much worried that she has no support. She has lost the evidences. She knows that the police inspector won’t be able to help her too. She wants some way to find help. Nishi is happy that Sonakshi has failed. She tells Sonakshi that she is fine, she has pretended to burn herself by taking measures, knowing Rohit and Yash will not let her die. She tells that she holds the courage to destroy everything.

She challenges Sonakshi that Rohit will throw her out in a day’s time. Sonakshi calls her a coward to hurt her own family. She tells that she will bring Nishi’s truth out. Nishi doesn’t think Sonakshi will find any source to get help. Sonakshi prays to find some source, who can make her win. Her prayers get answered. Ajit meets Rohit and reveals Sonakshi’s truth. He accepts his stupid plans that Sonakshi fell in problem. He tells that he got Sonakshi blackmailed by Yashwant and made her break her FD, since he was trapped in the gambling.

He also confesses of telling Suman the harsh truth of Naren’s relation with Pooja. He tells that Sonakshi hadn’t told any truth to Suman, she had been quiet to bear the consequences of everyone’s wrath just to save him(Ajit). He tells that Sonakshi is selfless and can never hurt anyone in the family. Rohit can’t believe him. He slaps Ajit in anger. He asks Ajit how could he put Sonakshi in trouble, he had made Sonakshi lie so much. He is much angered. Ajit tells him that he is ready to face his anger, but wants him to know Sonakshi’s truth.

Ajit feels that Nishi is really wrong, else Sonakshi would have not made this serious allegation. He asks Rohit to get to the root of the matter. Rohit calls Sonakshi and tells her that Ajit told her truth. He wants to meet her at home. Sonakshi gets delighted that Ajit initiated to instil Rohit’s faith. Elsewhere, Pari meets her friend and gets pills to abort the baby. Her friend asks her how could she get pregnant. Pari lies that she is aborting the child. She wants to give the medicines to Tanya so that Tanya undergoes a miscarriage.

She wants Rohan to come to her knowing about their coming baby. She thinks the baby will compel Rohan to come back. Meanwhile, Mahesh is mad at Sonakshi for marrying Rohit. He wants Sonakshi to suffer in the marriage. He tells that he will separate Rohit and Sonakshi. He is going to toughen her life, he doesn’t want her to stay happy. Nishi asks Mahesh to check all the evidences once. Mahesh doesn’t want to confirm. Nishi tells that its important to verify. She gets a huge shock when he tells her that there is no evidence, the inspector cheated them. He informs her about the inspector sending a courier to Rohit.

She realizes that inspector has sent the evidences to Rohit. She panics and tracks the parcel by calling the courier company. She thinks to go to the hospital and pick the parcel. Sonakshi hinders her and asks the cause of worry. Nishi swears to oust Sonakshi from the house. Sonakshi tells her that Rohit is again believing her and coming home for a talk. Nishi worries that he had received the parcel. She doesn’t waste time in argument. She goes to hospital to pick the courier before Rohit. She lies to Tulsi and gets the parcel. She finds just medicines in it. She learns about another parcel received before. She runs to Rohit’s cabin knowing he isn’t there.

She fears that she will get exposed. She faces Rohit, who has seen the evidences. He confronts Nishi about the murder attempt on Naren. She is shell shocked. Sonakshi gets decked up to meet Rohit. She hopes that their differences subside. She imagines a romantic moment with Rohit. She awaits Rohit. When he arrives, she runs to him with many dreams. Rohit shatters her dreams by slapping divorce papers on her. Sonakshi slips in trauma. She slaps Rohit in a fit of rage. She wants to know the reason for his decision. Rohit tells that he wants her to get free of all the problems. Why did Rohit take the extreme step, is it Veena’s compulsion or Nishi’s threatening? Keep reading.

Why don’t you guys ends up this Mahesh character from the show. It’s so irritating and once again the same story of a mad lover. Boring. It’s ok with all the blames on sonakshi. She with get the truth anyhow. It’s interesting and different. But not this Mahesh again for more madness. Please end it.