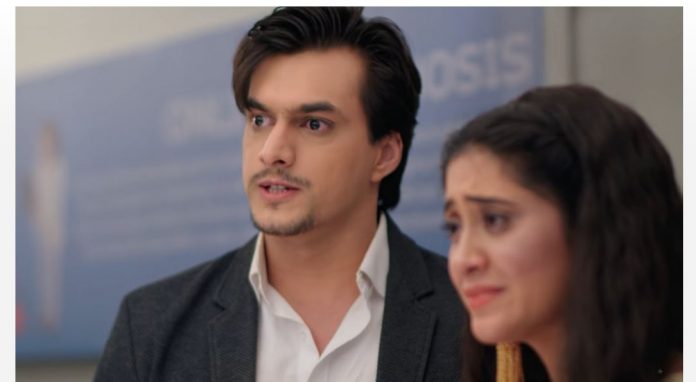 YRKKH Starplus Trisha back Naira Dadi unexpected conflict Suwarna and Manish explain Kartik and Naira to have a small celebration of their first marriage anniversary. They tell Kaira that life doesn’t stop for anyone, Trisha will get fine with time, but they have to move on to do justice with every relation around. They ask Kaira not to lose attention on themselves, since they shall spend some good time together. They do their duties as parents. They convince Kaira for a celebration. They plan gifts and surprise date for Kaira. Manish asks Kartik not to disappoint Naira and meet her. Suwarna asks Naira to think of Kartik’s sentiments, even if she is surrounded by Trisha’s worry.

She asks Naira to focus on her marriage for a while. Kartik and Naira keep their work. They get decked up for the celebration. They wonder what did Manish and Suwarna plan for them. They get overjoyed with the wonderful surprise. They happily cut the anniversary cake and spend quality time. Kartik feels they were missing some alone time since long. Later, doctor calls Naira to inform about Trisha. Lav answers the call in her absence. He learns about Trisha’s state getting better. He gets worried that she will tell about his mistake to the family. He calls Abhishek to inform him that Trisha is getting conscious.

Abhishek asks him to clear the call log and came to the hospital fast so that they talk to Trisha first. Kush refuses to accompany, but Lav insists him. Kartik and Naira also get the same news of Trisha’s recovery. They rush to meet her and know about the culprit. They are on the way, while Lav, Kush and Abhishek reach the hospital. Lav fakes illness and goes inside. He reaches Trisha and hears that she is close to consciousness. Abhishek asks Lav and Kush to talk to her and warn her against naming them. He stays outside and sends the nurse away. He asks Lav to threaten Trisha if needed. He guards them. He sees Kartik and Naira, and worriedly runs away.

Lav asks Trisha to talk to him. When he touches her, she reacts. Her state gets worse after the oxygen pipe gets removed by Lav’s mistake. Kush asks Lav not to trouble her and just leave. Kush doesn’t want Lav to do any more mistakes. Lav tries to fix the pipe back. He fails to do so. Kartik and Naira reach inside the ICU. Lav and Kush hide, while Naira finds Trisha’s state really bad. Kartik and Naira get the doctor to treat Trisha. They want to know the reason for her critical condition. Naira finds the oxygen pipe removed. She alerts the doctor. The pipe doesn’t get fixed. Trisha’s state gets worse. Naira panics.

She doesn’t want to lose Trisha. Lav and Kush didn’t intend to harm her and clear the fact to themselves. Kush asks Lav to realize what would have happened, he would have killed Trisha by mistake. Lav knows the consequences. Kush asks Lav to admit the mistake to Kartik and seek help, since Kartik has promised them to support. Doctors treat Trisha. Kartik consoles a dejected Naira. Kartik gets mad at the hospital staff, who tell about the non-working security cameras. Kartik asks them about the risk on the patient’s life. He loses his cool. Lav and Kush get scared to see Kartik’s anger. They change their mind. They are worried that Trisha will tell their names when she meets Naira.

Trisha recovers from coma. Kartik and Naira don’t want to leave her alone in the hospital. They bring Trisha home. Shockingly, Dadi reacts in an unexpected way and opposes Trisha’s stay in the family. Naira asks Dadi if she is worried for her social status than Trisha’s life. Dadi tells Naira that they have to think of the society, who will talk a lot about Trisha’s molestation. Naira faces a new clash in the family. Manish and Kartik fail to understand Dadi. Why is Dadi taking a selfish decision? Keep reading.

For last 10 yrs this story line was very peaceful and entertaining. Problems always fixed in one or two episodes. What is the message that writers are trying give but showing that any spoiled brat can pull a chunni of a girl and molesting is not a good entertainment. I am losing hope in this show.