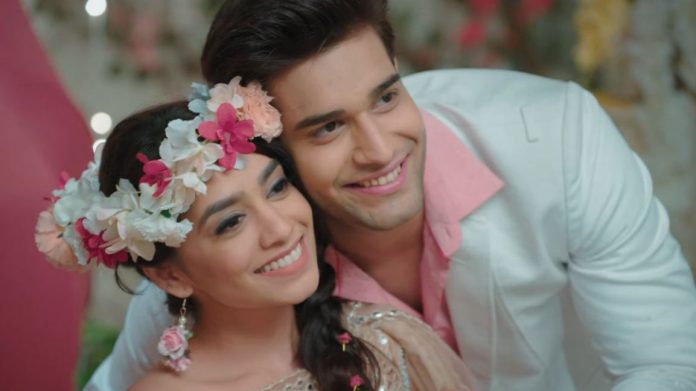 Kahaan Hum Rohan shocking remark upcoming today Rohit still remembers his promises to Sonakshi and strives to fulfill. He is much depressed and lonely on the valentines day. He knows that even Sonakshi is much sorrowful, all because of him. He couldn’t keep his promise to keep her happy. He regrets that he has to choose his parents’ lives and happiness, over his love for Sonakshi. He ended his marriage on a worse note just to break her heart so that she moves on. He is much hurt when he finds her stuck in the past and fighting the financial problems alone. He recollects the moment when Sonakshi kept her wish of getting heart-shaped balloons on Valentines every year.

He remembers the little things that give her happiness. He sends a balloon for her, just like she likes. She gets reminded of her wish when a little kid gives her the balloon and tells that its sent by one of her fan. She misses Rohit and wishes that he was the person sending the balloon. She isn’t aware that Rohit is indeed that person. Rohit feels sorry and tells that he loves Sonakshi a lot. The girl tells Sonakshi that her fan said he loves her a lot. Sonakshi misses to see her. Rohit comes across Pari, and learns about her pregnancy. He thinks Pari’s pregnancy will trouble Sonakshi.

Meanwhile, Sonakshi meets Sumit after getting Suman home. She tells him that she told her wish to Rohit, but some fan has fulfilled it today by sending the red balloon on Valentine’s day. Sumit asks her why does she not forget Rohit. She tells that she hates Rohit a lot, since he has cheated her much badly. She tells that Rohit would not even remember their love. She regrets to love him so much. She tells that Rohit has broken her trust and hope, he has ended her belief on love.

She never imagined that Rohit will end their marriage that day. Sumit consoles her. He goes to meet Rohit and reprimands him for always insulting Sonakshi. He asks Rohit why is he hurting Sonakshi when he loves her so much. He admits that he has come to help Sonakshi on Rohit’s call. He asks Rohit to meet Sonakshi and relieve her of the sorrow. He knows that Rohit has sent the balloon. Rohit asks him about Sonakshi’s response on seeing the balloon. Sumit tells that she is much hurt and hates him now for deceiving in love. He doesn’t understand Rohit’s love. Rohit makes him promise that he will always be with Sonakshi as a good friend.

Sumit asks him to realize that she loves him (Rohit). He promises to always support Sonakshi. He wants Rohit to stop drinking much. Rohit thinks how will Suman and Sonakshi handle Pari’s pregnancy matter. Veena calls Rohit home for Tanya’s baby shower. Rohit sobers him up. He goes home and joins the family on Veena’s saying. He sees Rohan and Tanya happy together. He informs Rohan about Pari’s pregnancy. Rohan gets too worried. Rohit tells that Pari is pregnant, she is becoming a single mother, the baby will be called an illegitimate and suffer all life. Rohan denies to have fathered the child. He tells that Pari is characterless and the child is of someone else. Rohit rebukes him for his cheap blames on Pari.

He knows that Pari madly loved Rohan. He warns Rohan against ruining a baby’s life. Rohan reminds him Suman’s misdeeds. He speaks against Sonakshi, which angers Rohit. Rohit wants to bash him up. He asks him to be careful, else he will lose his child. Nishi tells Veena that she will fulfill Naren’s wish and responsibility. She is making arrangements for Akash and Deepa’s marriage just like Naren wants. Veena is pleased and praises her. Naren wants to shout out Nishi’s truth. He is helpless. Rohit gets angered knowing Nishi’s drama. He learns about the staff making a mistake and sending the wedding invite to Sonakshi. Nishi is much upset and fires the new staff. Rohit doesn’t think its staff’s mistake.

He tells that its Nishi’s mistake, she likes to make mistakes and blame others. He stops Nishi from firing the staff. He shows his control and decision making power in the household. Veena asks Nishi not to worry, Rastogis will not have courage to face them. Suman is much angered on seeing the marriage invite, which means Sippys are showing off their celebrations to make them jealous. Sonakshi calms her. She tells that it would be a mistake by the staff. She is happy for Akash and Deepa.

Sonakshi tells Suman that she has to go for a movie audition for a cameo role. Suman feels sorry seeing Sonakshi’s struggles. She knows Sonakshi has gone through a lot in her life. She cries over Sonakshi’s ill fate. She vents her anger on Pari, who eats non-stop during her pregnancy phase. Suman wants to know what’s wrong with Pari. She asks Pari to do work and contribute in the house expenses. Pari doesn’t have regrets. Sonakshi calls Akash and Deepa to wish them for the marriage decision. Akash and Deepa melt their hearts, and feel sorry. Sonakshi gives her wishes. Nishi stops them from talking to Sonakshi.

Best Comment by Fatima Ali:
I am sorry but I lost all faith in that drama there is no positivity what so ever! Nishi’s truth isn’t coming out and Veena is just being a spoilt brat for not believing in Sona so I stopped watching it. I am no longer a fan of KHKT.