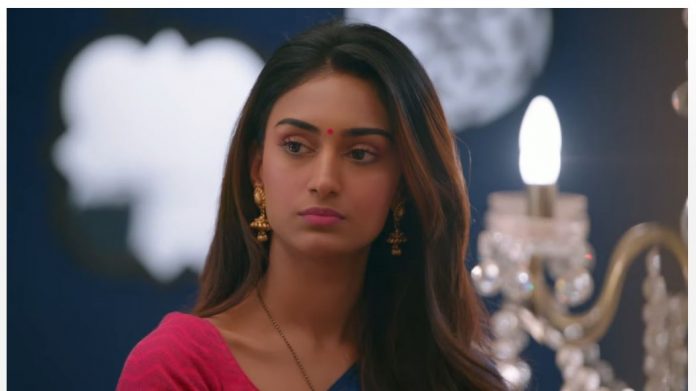 Kasautii Starplus Terrifying drama Viraj to murder Prerna Komolika threatens Mohini and Nivedita that she will leave the house if they allow Prerna into the family. She asks them how did their hearts melt for Prerna knowing she is dangerous for Anurag. She tells them that Prerna can never save Anurag, since she brings just bad luck for him. Mohini stays silent for the first time and doesn’t oppose Prerna. It doesn’t look like she is scared of anyone, but just keeping Anurag’s heart by favoring Prerna. Prerna is glad that Basus are supporting her and knows that’s the reason that Komolika is raged up. She tells Komolika that she has protected Anurag always.

She tags Komolika as an evil effect on him. Komolika asks Mohini if she can tolerate this insult of her favorite Bahu. Mohini stays numb still until Moloy comes to meet Prerna. Komolika asks Mohini to choose between Prerna or her. Mohini doesn’t get threatened and chooses Prerna. She allows Prerna into the house. Moloy and Prerna discuss about her marriage with Viraj. Komolika fumes that Mohini chose Prerna. Komolika is left with no option than to get quiet. She doesn’t want to leave the house.

She feels now Prerna will be out of Anurag’s life. She asks him to take Prerna somewhere very far from her. Viraj thinks Anurag can’t find anything about him, since the marriage will soon happen. Moloy questions Prerna about her decision to marry Viraj. Prerna tells that she is doing everything for Anurag’s sake, Anurag is recollecting things and getting strong feelings for her baby as well, since its his baby.

She doesn’t think that Anurag is aware of the medicines he is taking. She recalls the incidents. She doubts that Komolika is behind the wrong medication. She tries to find the truth. She goes to Anurag’s room when Komolika is away. Anurag visits Viraj’s house with an excuse.

He tricks the servant and makes a way to Viraj’s bedroom. He tries to find out about Viraj’s intentions. Servant doubts on him when he finds Anurag creating a mess in Viraj’s room. Anurag confuses him by lies. Still, the servant rushes to inform Viraj. Viraj gets a shock to know that Anurag didn’t lose and is still trying hard to get evidence against him.

He asks the servant not to let Anurag stay there. He asks him to call his fake parents home. Viraj rushes to his house to stop Anurag. Anurag doesn’t get any clue in the room. Viraj’s fake parents come home and get into their rich get up. They go to stop Anurag. Anurag gets evidences at the same time. He makes excuses once again to get rid of them. They get helpless. Anurag gets to find Viraj’s multiple fake identity cards. He realizes that Viraj is a big fraud. He is much shocked. Prerna searches for medicines. She gets the wrong medicines and confirms her doubt on checking it well.

She realizes that Komolika is giving wrong medicines to Anurag to stop his memory revival. Anurag decides to confront Viraj. He calls Prerna to alert her. Viraj tells that Anurag won’t be able to do anything. Anurag learns that Viraj hired actors to play his parents’ role. He wants to inform Sharmas. Prerna meets Viraj to call off the marriage. Viraj gets threatened by Anurag. He decides to kill Prerna and take his revenge.