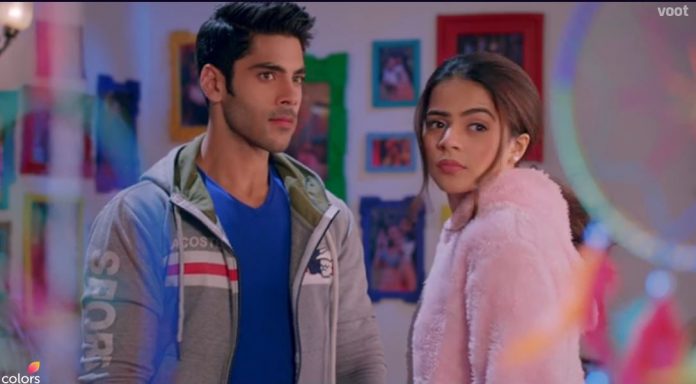 Prime time Shakti Twists Naati Pinky Highlights Upcoming Virat tells everything to his family about Heer and swears on Parmeet asking Sant Baksh not to snatch his friend from him. He says he will never ask for anything else. Sant Baksh says I will not snatch your friend, but you have to agree to my sayings. Virat agrees. Heer proposes Virat going down on her knees, holding the flower in her hand. She asks him to marry her. Virat refuses her marriage proposal and tells that he can’t marry her. Heer gets shattered and heart broken. She cries. Sant baksh fixes Virat’s alliance with his friend’s daughter and tells that they shall get the kids engaged tomorrow and make them married soon. His friend’s daughter Jharna smiles hearing about her engagement with Virat.

Heer makes an entry at Virat’s house. She threatens of committing suicide. Virat tells him that she will not listen to him. She emotionally blackmails him. Virat asks her not to do anything stupid. He gets scared. He pacifies her and calls her downstairs. He tells her the reason for his helplessness. She keeps his word and doesn’t do anything wrong. He tells her that he did this to protect her from his family’s anger. Heer challenges him that she will not let him marry Jharna. Dada ji gets glad to see her love for his grandson. He supports Virat and Heer’s love story, unaware that Heer can’t marry him.

Naati Pinky Ki Love story: Gagan goes to Megha’s house. Pinky tells Ram and Jagdish that she feels that they should be with Gagan at this time when his friend is in hospital. Gagan reaches Megha’s house and asks what is this madness? Megha asks him not to leave her. While Ram, Pinky, Jagdish and Lakshman are going to the hospital, she spots Gagan’s car outside Megha’s house. She tells Ram that it is Gagan’s car and his friend must be discharged and they shall check him. They walk inside.

Gagan asks her to understand why he is with Pinky, that’s for property and money. Megha tells that she don’t want to understand anything and hugs him. Ram comes inside and sees Gagan and Megha hugging each other. He gets angry and looks at him. Pinky smiles. Ram warns Gagan and tells that he had already told him not to corrupt the relations and don’t betray her daughter.