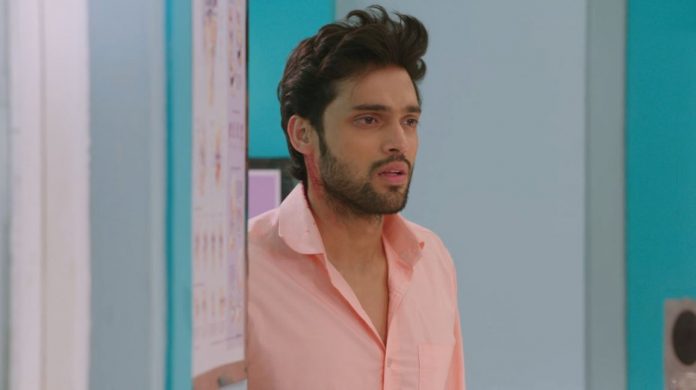 Starplus Good News Kasautii Surprises Upcoming disaster Happy times return in Anurag and Prerna’s life after a heavy storm because of Viraj’s madness. Viraj threatens Prerna to marry him, else he will be killing Anurag. He tells her that he will marry her some how, he knows how to compel her. Anurag is tied up to the car. Viraj finds Prerna not answering him. He goes to cut the rope. He counts down and builds up pressure around her. She gives up and stops Viraj from pushing Anurag down the cliff by cutting the ropes. She tells him that she will marry him, but Anurag should be safe.

Viraj promises to spare Anurag’s life and never harm him again. Prerna sits in the mandap at the cliff. She gets helpless to marry again for Anurag’s sake. She tells Viraj that Anurag won’t leave him once he gets conscious. She prays that Anurag gets conscious and fights back. Viraj asks the goons to record the marriage video, since Prerna may deny it later. The goon records and sends the video to Komolika. Komolika is very happy seeing the forced marriage. She wants to see it live. She thinks Anurag and Prerna won’t be Anupre again. She is really excited to watch Prerna in tears.

Prerna’s prayer gets answered. Anurag awakens when a Mata chunri falls over his face. He then finds Prerna in trouble. Viraj asks the pandit to just hurry up with the marriage rituals. Pandit feels its wrong to force a girl for marriage. He gets worried seeing the situation and runs away. Prerna is happy to see Anurag in his senses. Anurag first saves himself from the goons. Prerna shouts for help. Anurag bashes up the goons. He gets free from the ropes before Viraj goes to stab him. Anurag and Viraj have an action sequence. Viraj rages and is ready to do anything for his revenge.

He tells Prerna that she has cheated him and forced him to take this step. Prerna wants Viraj to get punished. Viraj injures Anurag’s head. Anurag’s head bleeds. He falls down. The heavy blow makes Anurag recall his memory. Anurag doesn’t give up. He beats up Viraj. Viraj tells Prerna that he is left with no option than to kill Anurag. Prerna tells Viraj that she will kill him if he attacks Anurag. She defends Anurag. Viraj tells that Anurag came in between his plan and now he has to die. He aims at Anurag. Prerna goes to stab Viraj. She gets rid of him by pushing him away.

Viraj shoots at Anurag. He stumbles and loses the aim. Prerna gets shot by him. Viraj falls down the cliff. Anurag panics for Prerna. He takes her to the hospital and recalls his past while crossing the journey. He recalls Prerna all the way by seeing the places. Anurag admits Prerna in the hospital for the bullet removal surgery. Anurag tells the doctor that Prerna is pregnant. Anurag prays that Prerna and her baby stay fine. Prerna is operated. Her life gets saved and she delivers a baby girl. Anurag waits outside and learns that she is fine.

Anurag recalls the past and compels himself to see the love of his life. He gets to see Prerna in his memory flashes. He learns that he has become a father of a baby girl. Anurag regains his memory. Basus and Sharmas learn about Anurag and Prerna’s daughter. Anurag tells the families that he has regained his memory, he will take Prerna and their daughter home. This brings a huge wave of happiness in both the families. Mohini also seems to be happy. Komolika loses support. She gets revengeful and determines to kill Prerna. Anurag and Prerna’s death track will be seen, as confirmed by the new promo below.