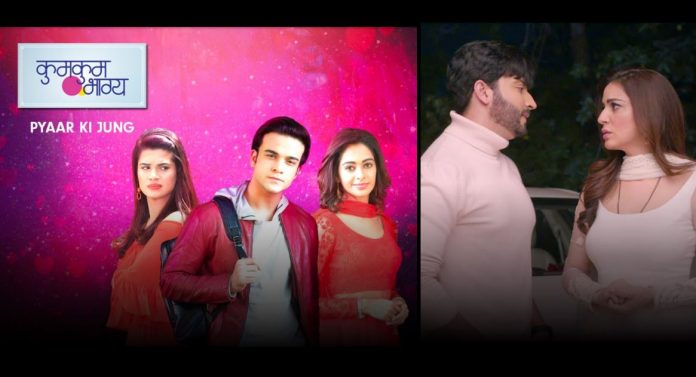 Bhagya Duo Kumkum Kundali Upcoming Zee stunners Ranbir confronts Maya for the molestation blame. He wants her to confess that she has false accused him. He wants to know who is the person behind the plotting. He tells her that he will reveal the truth to her family if she doesn’t tell the truth. Rhea threatens Prachi and asks her to stay away from Ranbir. Prachi asks Rhea not to spoil Ranbir and her relation. Rhea shouts that there is no relation between them. Prachi admits that there is a relation between Ranbir and her. Maya pleads to ranbir to leave her. He demands the truth. Ranbir turns into an angry young man for the first time.

Kabeer gets a huge shock on seeing his look alike taking away Zara. He learns that its a Jinn in his disguise, taking Zara to the Jinn city. Zara gets tired of running. She finds the Jinn in Kabeer’s get up. She tests him by asking him to hold her hand. She knows Kabeer would never touch her. She confirms the truth. She realizes he isn’t Kabeer. She shouts to Kabeer for help. Kabeer runs in the jungle to find Zara.

Rakhi, Dadi and Rishabh support Karan. They are convinced that Babbi will soon tell the truth. Sameer is worried for Shrishti and Sarla. Kritika also thinks of Aroras, who are fighting the mess alone. Kareena hates Shrishti and doesn’t want her home. Shrishti tells Rishabh that the video with the police is fake and isn’t tested by the forensics. She asks him to get the video tested so that Preeta can be proved innocent in the court. Police arrives at Luthra mansion to arrest Preeta. Inspector tells that he got the news of Preeta hiding in their house. Luthras get a shock and wonder who had reported this to the police. Rishabh and Karan strive to protect Preeta from the law.