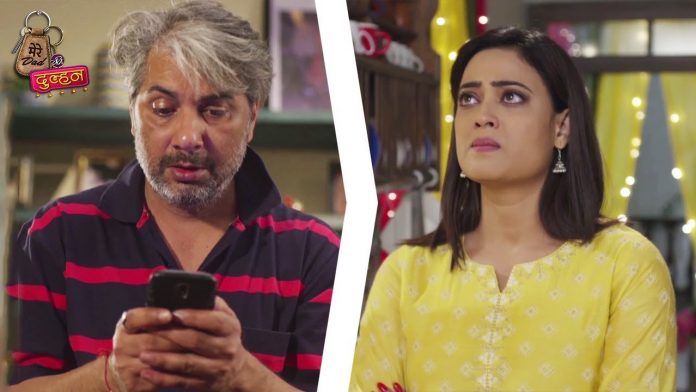 Amber strong stand Guneet confession in Dad Ki Dulhan Guneet feels Anurag is ashamed of her profession. He wants her to grow in life and career. He wants to support her, but by lying to his mother. She thinks he won’t keep her happy, since she is made to compromise even before marriage. Amber advises her and asks her to be determined always. He praises her sincerity in work. Guneet tells Amber that she wants to say him something. She rehearses with Amber to tell the truth to Anurag. Amber waits to hear her. Guneet opens her feelings in front of him and tells that she doesn’t want car, bungalow, money and business. She just wants love. She tells that she just wants such a person who loves her, and whom she loves. She needs compatibility with him.

She is romantic type and can’t leave without love, compatibility and romance. Amber hears her carefully. She expresses her feelings from her heart, which touches his heart. He thinks this is the girl he has loved chatting online. He sees Baawra mann in her again. He wants her life to get simplified. He gets to see her genuine good side. Guneet wants to break her roka with him. She doesn’t want to make any new relation on the basis of any lie.

Amber tells that he can give her a very good life, will keep her happy, will love her very much. Guneet is shocked and at once thinks he is saying it from his heart but then thinks he is rehearsing and acting. Guneet decides not to marry Anurag compromising her wishes. When she declares her decision, Anurag accuses Guneet and questions her character, says Guneet is breaking roka with him for an online friend whom she doesn’t know.

He tells that Pammi has forced Guneet for the marriage, he has given her everything, but she couldn’t even give a truth. He criticizes her for chatting all day with her online friend and not valuing someone who is ready to marry her. He asks Amber why is he defending Guneet when they always fight. He thanks Guneet for ending the alliance and sparing his life. Amber takes a stand for Guneet and supports her. He tells Anurag that Guneet needs no change and she is best at everything she does. Amber will be seen confessing to Guneet that he is her online friend. She gets a deep shock and bashes him up. She feels fate has cheated her. Will this be Amber’s dream? Keep reading.