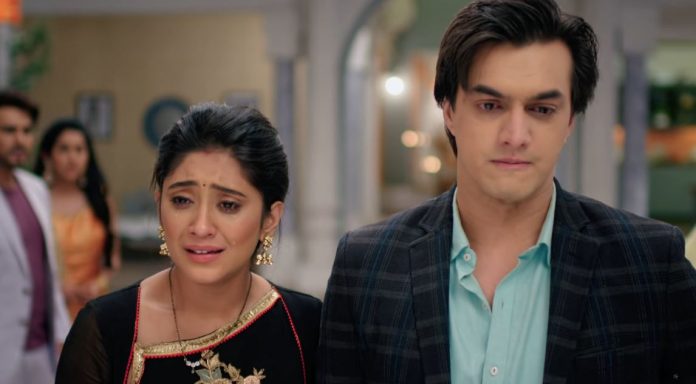 Yeh Rishta Kartik Naira ousted Intense battle begins Kartik and Naira confront Javeri for saving his son Abhishek cleverly by fighting Lav and Kush’s case for Goenkas. Kartik tells that he has filed a case to get Abhishek arrested. Naira tells that Trisha has named Abhishek and now he won’t get saved. Kartik asks him to call Abhishek so that he doesn’t face more troubles. Abhishek meets them and tells that he didn’t run away. Javeri tells them that he can clarify, Abhishek didn’t flee to US. Abhishek tells that none can do anything when his dad is with him.

After Javeri and his son leave, Lav and Kush get relieved that they are save. Manish scolds Kartik for cheating the family by supporting the family. Kartik tells that he is just supporting the truth, Trisha is right. Manish counts Akhilesh’s favors on Kartik. He asks Kartik how can he get Lav and Kush jailed. He tells that he loves Akhilesh as his own child, and now he will not see him in sorrow. He loves Kartik, but doesn’t want to fall weak for his love. He wants to stop Kartik from going against the family by blindly obeying Naira. Kartik can’t see Manish going anything wrong.

Manish angrily commands him to leave his house and take his house breaking wife Naira. He feels they aren’t fit to live with them. Kartik takes Manish’s blessings and is sure that he will always be in Manish’s heart. He is ready to leave. Naira feels sorry that he is parting ways with his family because of her. He tells that he realized his mistake late and faced this day. Kartik and Naira decide to lie to Kairav. Kairav hears their plans to leave the house. He asks Manish to save him from police. He doesn’t want to go anywhere. Manish hugs him. Kartik wants Kairav to listen to his dad. Manish asks Kartik if he has heard his dad and acted well.

He wants Kartik to save his family, than helping Trisha. Dadi and Suwarna ask Kartik and Naira not to leave. Kartik and Naira decide to leave, with or without Kairav. They come back home with a purpose. They want to get evidences against Lav and Kush. Lav and Kush are overconfident that nothing can harm them now. They are proud to be Goenkas. Kartik tells Naira that he had kept Lav’s phone. He goes to get the phone, by hiding from Manish. Lav and Kush aren’t scared of anyone and spoil Kairav further.

Dadi further fuels the fire by calling Naira a careless and selfish mother, who isn’t thinking of Kairav. Kartik wants to explain that their main aim is to set a right example for Kairav. Kartik and Naira have to fight the family for Kairav’s betterment as well. They want the family to realize their mistake of supporting evil, which will eventually land them in bigger problems.