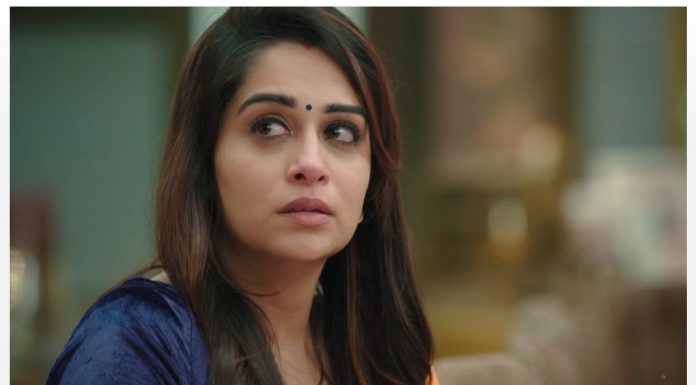 Kahaan Hum Alarming shock Sonakshi critical missing Rohit wants Sonakshi to meet him once, so that he takes her blood samples for the tests. He tells that its an urgent procedure, else her life will be in big risk. She doesn’t want to see his face. She asks him to leave. He finds Pari there and knows Sonakshi loves her family. He plays a drama and shouts that Pari is really falling unwell. He asks Suman and Pari to act to get Sonakshi out. Pari shouts in pain. She fakes it to get Sonakshi’s attention. Sonakshi worriedly opens the door and comes out to check on Pari. She realizes Rohit’s drama and rebukes him. She asks him to not play with her emotions.

She tells that she hates him and will never get any treatment from him. She tells that she will jump down the balcony and die, if Rohit comes to treat her. She locks herself in the balcony. He tells her that Munya is infected and admitted in Sippy hospital. He wants to check Sonakshi for the same symptoms. He tells that he is saving her life. She refuses to take his help. She threatens of suicide and scares him. Rohit gives up and asks her to get the blood test done in time, which is really necessary. He meets Sumit downstairs and asks him to just get Sonakshi’s blood tests done. Sumit wants to take her to Rohit’s hospital.

Rohit asks him to just take her to another hospital for the sample collection. He wants to get the sample tested in his hospital lab. He explains his plan to Sumit and waits for his message. Sumit meets Sonakshi and finds her really ill. He rushes her to the hospital for immediate tests. Sonakshi wants her family to stay away from her, so that they don’t catch the infection. Meanwhile, Tanya is brought to the hospital by Rohan and Veena. Nishi is fed up by the drama. Tanya tells Rohan that they will see their baby during the sonography test. She sounds excited. Rohan takes her to the psychiatrist.

He tells that her gynac has suggested them to meet the psychiatrist first. Tanya gets hyper and asks him if he thinks she is mad. She runs away thinking he is trying to harm her baby. Rohit comes across her, when she shouts for help. He gets much shocked to know that Tanya is mentally disturbed after her miscarriage. Veena and Rohan explain about Tanya’s trauma.

Rohit suggests Rohan to stay away from Tanya, since his cheat and bad memories may sink her in more depression. He tells Veena that they can take Tanya home, since the hospital has many infected patients. Nishi gets a shocking news about Naren’s improvement post meeting Sonakshi. Nishi is much worried thinking Naren will soon recover and reveal her truth.

She tells that she will keep Sonakshi away from Naren to stop his recovery. She doesn’t want Sonakshi to meet Rohit. Sumit takes Sonakshi to the hospital for tests. When they are asked to wait, he angrily reveals Sonakshi’s celebrity status. He goes hyper, while Sonakshi stays calm, composed and sensible. She deals with the hospital staff nicely. She is ready to wait like other patients. She gives her blood sample. She is asked to stay back until her blood reports come. Sumit wants a private ward for her. Doctor apologizes for failing to provide a private ward. Sumit tells that she is a celebrity and can’t be with everyone.

Sonakshi tells him that when everyone is going through the same fear and suffering, then how can the status differ. She calms down Sumit. Sumit feels proud of her. Rohit asks Sumit to take care of her. He awaits her reports. Nishi learns about Sonakshi’s infectious state. She plans to change the reports. Sonakshi is scared to die after witnessing a patient’s death. She tells Sumit that she is scared for her family’s well being, she wants to be their support. Sumit asks her not to be scared.

She tells that she is a normal being, she wants to fulfill her responsibilities. She asks him to look after her family if she dies. He asks her to stop being emotional. She is glad to have a friend like him, since he is with her knowing the risk. She thanks him for being so supportive. Rohit overhears Sonakshi’s words and prays for her recovery. Sonakshi is taken to the medical camp, but doesn’t reach there. She gets kidnapped, which raises Rohit’s temper. Suman gets afraid and thinks Sonakshi has taken a wrong step like committing suicide. Rohit asks her not to think negative. He struggles to find Sonakshi. Is Mahesh behind the kidnapping? Keep reading.

Please extend khkt, we are eagerly waiting for this good news to come but till now the channel failed to give so. Hope we get a good news, till then fingers crossed, but Ronakshi will leave a deep impact on us, love this show so much. I never missed a single episode of it and promise to watch it religiously. Love khkt, love Dipika and Karan, love Ronakshi, best serial till date.