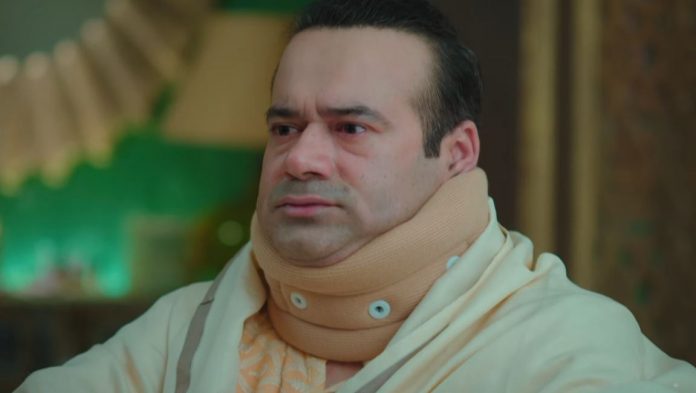 Kahaan Hum New upcoming Naren Ronakshi fightback Rohit is too stressed to know about Sonakshi’s reports. There is a fault in the reports because of Nishi. He isn’t aware that the reports he has received are wrong. He asks Tulsi to check the reports. Tulsi reads out the positive results to him, which breaks his heart. He can’t believe that Sonakshi is infected. He thinks of the dire consequences. He doesn’t want Sonakshi to face death. He loves her a lot and can never imagine to lose her, even when he had ousted her from his life and divorced her. He just loves Sonakshi from the bottom of his heart. He sinks in her memories and sheds tears. He informs Sumit about Sonakshi’s results.

Sumit, Suman and Sonakshi are also shocked to know about the positive results. Sonakshi is also shattered. She fears to die since she is much worried for her family. Suman and Sumit are also worried for Sonakshi’s welfare. Suman doesn’t want to waste time in crying. She tells Sumit that she will fight for her daughter’s life. She doesn’t want to leave Sonakshi unattended and sink her more in sorrow. The health ministry issues a notice and arranges the huge quarantine camp on the city outskirts so that the city residents stay safe from the super virus.

The doctors declare the notice and ask the patients to get into the buses parked outside, which would leave for the camp in some time. Sonakshi is also asked to go to board the bus and leave for the camp. Sumit doesn’t want her to go, since she is a celebrity and needs special treatment. Sonakshi wants to be with the common people, since they all are battling the same disease. Suman opposes the doctors who compel Sonakshi to leave. Suman is caught up and locked inside some room, while Sonakshi is separately taken to the camp. Suman doesn’t want Sonakshi to die. She wants the best treatment for her daughter.

Sonakshi wants Suman and Sumit to be away. Sumit informs Rohit that Sonakshi is taken to the camp. Rohit tells that Sonakshi can’t be treated in the camp, where the patients would be more serious. He wants Sonakshi to get cured in his hospital. Sumit asks him to bring Sonakshi to his hospital. They rush to the hospital to stop Sonakshi. Sonakshi gets occupied with many thoughts. She is much disturbed due to the fear of parting away from family. She misses Rohit. Sumit and Rohit reach Suman and ask about Sonakshi. Suman tells that the hospital staff has forcibly taken Sonakshi to the camp. Rohit tries to find out about her and learns that she has left for the camp already. He tells Suman that he will go to the camp and get Sonakshi back.

Nishi gets Sonakshi’s real reports. She checks the negative results. She had planned to swap the reports. She tells that Sonakshi has ordinary flu, but sent to the camp, where she will really get infected by super virus. She wants Sonakshi to die by catching the infection. She feels happy that her enemy will soon die. Meanwhile, Veena tells Naren about the problems in their family. She is upset that both her sons are sorrowful and suffering because of failed marriage. She wants Naren to get fine and support her. Naren wants to pacify her. Nishi observes Naren from far. She wants Naren to stay in the same state so that he never fight back and expose her.

Ajit spots Nishi at the door and alerts Naren. He asks Naren not to make any sign of recovery evident to Nishi, since she is really dangerous. Naren takes his advice. He acts non-recovering. Nishi asks Veena to make tea for her and sends her off. She also asks Ajit to go and manage work at the hospital. She then tests Naren’s recovery by hurting his hand. Naren tolerates her madness and doesn’t react. He tricks Nishi. Nishi is convinced that he isn’t recovering, else he would have reacted on feeling the pain.

Nishi tells him that she has found a good way to kill Sonakshi. She tells that Sonakshi wasn’t infected with super virus, but she has changed the reports and sent Sonakshi to the medical camp, where she will now get infected by the patients’ presence. She tells that Sonakshi will die soon and then Naren won’t get any motivation source in his life. Nishi goes away. Ajit returns to Naren and finds him hurt. He knows Nishi has hurt him. He does the aid to Naren’s wounds. He asks Naren what did Nishi say. He tells that Nishi maybe harming someone. He asks Naren to give some hints and write on the notepad.

Naren writes to give hints that Sonakshi is in danger. Ajit wonders how is Nishi harming Sonakshi. Rohit and Sumit inform Suman that Sonakshi didn’t reach the camp, she is missing. Suman gets too worried. Ajit informs Rohit that Nishi is putting Sonakshi in danger. Rohit checks the reports and learns about Nishi’s move to swap the reports. He confronts Nishi about kidnapping Sonakshi. Nishi denies the blames.