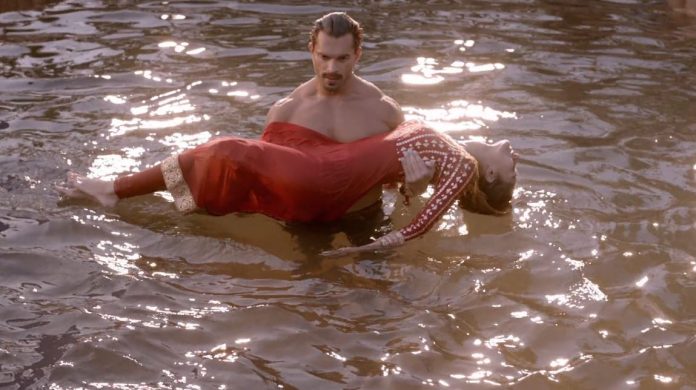 Kasautii Leap Bajaj Prerna together Anurag turns evil The biggest twist in Kasauti comes today. Mr. Bajaj returns to save Prerna’s life, while Anurag turns out to be a villain in their lives. Mr. Bajaj makes an entry when Anurag takes a step to kill Prerna after snatching all the property given by Mr. Bajaj to her. It so happens that Prerna clears her dilemma about Anurag because of the strong faith. Prerna confronts Anurag about the unseen threat that’s scaring her again and again.

Anurag pacifies her and tells her that they are soul mater, they will always be together and live a good life. His words of assurances settles her fears for a while. He takes her to the Howrah bridge for confessing love to her. He gets boasting of his feelings for her so much that she gets confused.

He tells her that he loves her since she taught him the meaning of love. She tells that love is something beyond any feeling for her, they have soul leave between them. He wants to hear what loves means to him. They share few romantic moments on the bridge. She asks him to take her home so that they can go ahead with the marriage. He doesn’t let her go and instead makes her sit on the edge, while instilling fear in her. She shows immense faith on him and his love. She tells him that she loves him so much that she is ready to die for him, she would be happy to give her life for his sake.

Anurag asks her to then die and pushes her into the river in no time. She is shell shocked and unable to react while she falls inside the river. She gets trapped badly when the plants tie up her legs and make her more helpless. Prerna recalls her family and new born baby. She wanted to live with them. She wants Anurag to answer her about the big deceive. Just then, a dramatic entry happens of Mr. Bajaj. Unexpectedly, he reaches her out of nowhere and saves her life. He takes her to a safe place. She gains consciousness and realizes that Mr. Bajaj is alive. He tells about the fake news about his death in a plane crash.

He adds that he was keeping an eye on her and got to know about her marriage. He wanted to tell her that he is alive and just then found her in big trouble. She can’t believe that Anurag tried to kill her. She asks him to take her to Anurag so that she confronts him. Anurag had told her about visiting his farmhouse. She goes to the farmhouse and looks for Anurag. She gets deeply shattered to find Anurag and Komolika together, rejoicing on her death. She can’t believe her eyes and is taken aback. Mr. Bajaj stops her rage and takes her away to his place, so that she stays protected. He tells her that Anurag did everything for the sake of her property, which he (Bajaj) had given to her baby.

He tells that Anurag is wrong to fall for Komolika and deceive Prerna, who loves him selflessly. Prerna isn’t able to understand why did Anurag fake love and since when. She recalls his planning with Komolika. Mr. Bajaj reveals the shocking facts to her that Anurag had planned this since long and did attempt to kill to her after taking her signatures on the property papers by deceive. She is more shocked to know about Komolika sending her baby to an orphanage. Mr. Bajaj and Prerna head to the orphanage, where they come across a fire incident and learn that it took away the baby’s life. Prerna breaks down with her life’s worst test.

She wants to die along with her baby. Her world shatters down. Mr. Bajaj saves her life and gives her an aim in her life, by asking her to be Kuki’s mother. He proposes her and asks her to accompany him to London to have a family with him and Kuki. Will Prerna leave from Anurag’s life or take revenge on Komolika and him? What’s the reason behind Anurag’s madness? Keep reading.