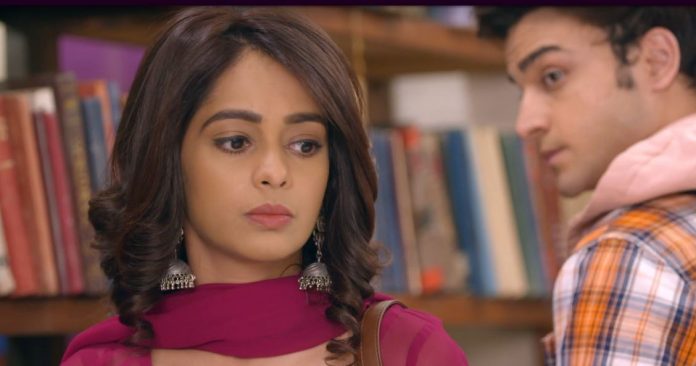 Kumkkum Bhagya Ranbir hushes Prachi by love confession Ranbir and Prachi don’t find any alternate door or windows in the library. They get locked up inside. She gets scared of the situation. He tells her that maybe she is scared of him. She tells that she can never be scared of him. He asks her to think of the strange situation, they will be together when it gets dark, maybe they come closer and hear each other’s heartbeat in pitch of silence. He tells her that she may fall in love with him as well. She denies her feelings, growing for him. She gets speechless on hearing him. She doesn’t know what to tell him. She asks him not to marry Maya. She falls for him, but isn’t able to realize or admit.

He asks her if she will let him marry Maya. She tells that she is stupid and can fall in more troubles. He tells that he doesn’t want to go out to face his life’s troubles. He just wants to be with her. She asks him to get help. On the other hand, Rhea punishes Maya by slapping her and asks her to refuse for the marriage. Maya threatens her and wants her to apologize. Rhea tells that Ranbir is her love, she hired her to just win him. She warns Maya again and again. Maya insults Rhea and tells that she will get rich after marrying Ranbir.

She wants the high status by marrying Ranbir. She asks Rhea not to come in her way. Rhea tells that she will stop her. She tries to dominate Maya as the master of the game. She threatens to tell the truth to her dad. Maya also threatens the same thing to Rhea, that she will go to Abhi and reveal the truth. Rhea tells that she has a proof against her. Maya tells that if Rhea exposes her, then she will also expose Rhea. She tells that Abhi will never forgive Rhea, on knowing that Rhea have given a diamond necklace to bribe her. She asks Rhea to think of the homeless situation and defamation. She feels happy to get married to Ranbir. She invites Rhea in her marriage. Rhea thinks to find another way to deal with Maya.

Ranbir and Prachi get timely help by a peon, who opens the library door. Prachi gets hurt. Ranbir is concerned for her. She wants to know the reason for his concern. He jokes on her brainless state. She wants to beat him. Ranbir falls down and gets hurt. Rhea finds them sharing a moment and is more disturbed. Rhea shares her annoyance with her friends. They calm her down. Rhea tells about the huge mess. She loves Ranbir and is desperate to get him. She tells the truth that she had brought Maya in Ranbir’s life to make him away from Prachi, but now Ranbir is marrying Maya. She is upset because of the third angle in the tale.

Prachi gets to see the video of Ranbir and Maya’s conversation. Shahana asks her about Ranbir’s confession. Prachi tells that Ranbir lied to take Maya into confidence. Shahana tells her that Ranbir was really trying to make her jealous and fell into this mess, he really loves Prachi. Prachi doesn’t want to believe this. Shahana asks her if she feels for Ranbir. Prachi doesn’t want to admit. Ranbir is happy to think about Prachi, even when he is sinking into his life’s troubles. He wants to propose Prachi. Pallavi overhears him and thinks he loves Rhea.

She asks him to go and confess love to his lover, the proposal will never get bad, she will definitely say yes. Ranbir admits that he is in love with someone. He thinks of Prachi and blushes. She tells him that she knows everything about the girl. He asks her what is she thinking. She wants him to name her. She tells that the girl is helping him in Maya’s case. She wants to talk to the girl’s family about the alliance. He thinks she is also talking about Prachi and would soon talk to Pragya.