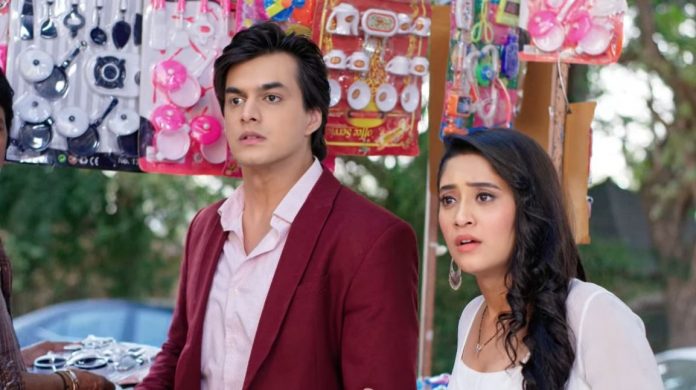 YRKKH New Tonight Kartik accident Javeri plays wicked Kartik and Naira are much sorrowful that they couldn’t help Trisha and lost the phones to Goenkas. Trisha doesn’t want them to feel sad and stay away from Kairav. She apologizes to them that its happening because of her. She asks them to stop fighting for the justice. She tells them that she doesn’t want any justice, there is no way to win the case now. She knows that Lav and Kush will win the case because of Goenkas and Javeri’s support. Naira asks Trisha why is she being negative, they can still fight, they don’t know if the phones had any evidence or not, they can’t lose out because of their fears.

Kartik also tells that they have lost the proof, but not the courage, they will fight until they win. He tells Trisha that they will make a fresh start and find evidences. They don’t want Trisha to blame herself. He tells that Kairav will surely understand them, he will not go against them. On the other side, Dadi takes care of Gayu and makes her happy. Gayu gets delighted that Dadi is thinking so much for her. She likes Dadi’s concern. Dadi leaves her phone by mistake. Gayu goes to return her phone when Guru ji calls her.

Gayu overhears Dadi and Manish’s conversation. Dadi tells that she has scared Gayu so that Gayu goes to Singhanias and ask for help, that’s why they have got the phones back. Gayu thinks Goenkas are wrong and selfish, Naira is right to get justice for Trisha. She feels sorry to scold Naira. Kartik, Naira and Shivani ask Trisha to recall the incident once again so that she can tell them trivial things to help in the case. Trisha narrates the entire incident to them once again. A new detail comes out. Trisha tells them about colliding with a balloon seller while she was running away to save herself from the evil guys. She describes the balloon seller.

Kartik tells them that he will find the balloon seller, who can become a witness against Lav, Kush and Abhishek. Trisha isn’t sure if they can get him so soon. She thinks it will be too hard. Kartik wants to give it a try. Shivani asks Kartik and Naira to find him some way. Kartik and Naira look for the balloon seller. They get some details about him, but don’t get to meet him. Kartik hopes that they get the witness before the court hearing tomorrow. Naira tells that their case will get over if they have no witness. Javeri wants to tackle them and finish the case in one hearing. He assures Abhishek that he will win the case.

Abhishek calls him the best dad in the world. Javeri is confident and boasts that he is the best lawyer in the world. He wants to do anything, but win the case to save his son and also his reputation. Goenkas are worried for the children. Manish tells Dadi that Lav and Kush did wrong, but he will save them. Manish and Dadi miss Kartik a lot. Kartik and Naira speak to Gayu and get to see Kairav on video call. They get much upset. Everyone is seen awake all night and in tension over the court hearing. Kartik and Naira wish that they win justice for Trisha some how in the hearing today.

They go to the court with Trisha, while Naksh tells Kartik that he will look for the balloon seller and inform him if he finds him in the market area. Naksh struggles to find the man, but in vain. Shivani wants the witness to come soon. Javeri meets them and targets Shivani. He asks her to keep his reputation by giving him a tough competition in the court fight. He wants Shivani to be prepared for her first and last case.

Kartik and Naira taunt Javeri and answer him well, when Javeri tells about the verdict falling in his favor. Naksh informs them that he didn’t find the man by now, he is still trying and will bring him to the court. Kartik and Naira wait for the witness. They ask Shivani to give her best. Kartik learns about the balloon seller and rushes to find him. He falls in danger when he gets close to meet a deadly accident. Javeri plays evil to win the case at any cost.