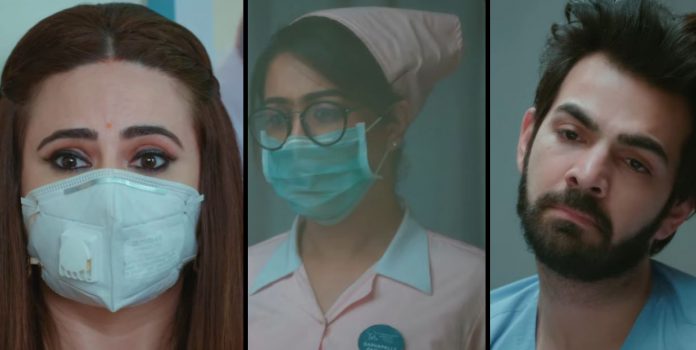 Kahaan Hum Best episode Ronakshi set to conquer Sonakshi expresses a wish to see Rohit. Tulsi takes her to Rohit. She gets much sorrowful to see Rohit. He finds Sonakshi in his ward. He asks her if she has come to see him in a weak state. He wants her to be happy since he won’t be alive to trouble her further. Sonakshi doesn’t want him to lose hope. She decides to save his life. He has lost the battle to the virus. He wants Sonakshi to be fine. Sonakshi wants him to get fine so that their incomplete fight goes on. He isn’t scared to die. He just prays for her well-being and happiness, since she is also his life. Sonakshi is taken to the OT. Tulsi praises Rohit and Sonakshi’s true love.

She tells Sonakshi that Rohit is unwell and destiny has chosen Sonakshi as his cure, they will be uniting. Sonakshi doesn’t think that Rohit loves her. She is confused to listen to her heart or mind. She thinks Rohit hates her and Veena was mistaken. She doesn’t want to have any bitterness on her soul. She proceeds for the procedure. Suman and Sumit reach the hospital. Suman wants to stop the procedure that can take Sonakshi’s life. She wants her daughter to be fine. Sonakshi turns critical when the body rejects the virus. The doctor worries that she maybe sinking and dying.

Suman tells Sumit that they have to stop the procedure and get Sonakshi out of the OT. She confronts Veena for being a selfish woman. She asks Veena where did she find Sonakshi for her purpose, when the police failed to find her. Veena gets tensed to admit her mistake. Suman reprimands her for using Sonakshi for their selfish motives. She tells that she won’t spare anyone who harms Sonakshi. Nishi answers Suman to make her hate Sippys more. Suman tells that Sonakshi is foolish to risk her life for clever Sippys. Nishi tells her that Sonakshi agreed for the procedure by her own will, they didn’t force her.

Suman and Veena get worried when the doctor tells them about Sonakshi’s critical state. They pray for Sonakshi’s life. Veena wants Sonakshi to survive so that she can save Rohit, else she isn’t interested in seeing Sonakshi alive. Nishi wants Sonakshi to help the team make the antidote. She expects to get the antidote and also patent it. She wants to earn much money by selling the antidote to the government. She doesn’t care for Sonakshi. Doctor tells Simmi about Sonakshi’s state, her low pulse and chances of a cardiac arrest. He asks her to call a cardiologist immediately. Simmi rushes to inform Rohit about Sonakshi’s critical state.

Rohit acts wise on time and suggests her the necessary steps to be taken to stabilize Sonakshi’s blood pressure. He also advises her to modify the virus composition to re-inject it to Sonakshi’s body. He is sure that Sonakshi’s blood will produce antibodies by reacting with the new virus. Simmi rushes back to the OT. She tells the changes to be made. Sonakshi soon gets a stable heart rate after the doctors treat her as advised by Rohit. Sonakshi’s blood pressure also turns normal. The doctors perform the same procedure with a new virus composition. Sonakshi reacts to the virus as expected. Her body starts producing the antibodies. The doctors praise Rohit’s talents.

Rohit and Sonakshi’s love is also praised a lot. Tulsi wants both of them to get saved. Doctor tells Suman and Veena that Sonakshi is stable and very soon they will make the antidote. He tells that Rohit will be given the antidote and saved. Veena acts selfish and wants to rush to save her son. Suman counts her big favor on Veena. Nishi doesn’t think she should waste time with them. She plans to earn money by using Sonakshi. She doesn’t want Veena to fall in Sonakshi’s favor. She tells Veena that Sonakshi has done everything to get famous again, so that it helps her in getting new work. She reminds Veena that Sonakshi tried to harm Naren.

Veena is confused about Sonakshi. Rohit learns that procedure got successful. He was sure that Sonakshi is a brave fighter. He wants to meet her once. He takes precautions to go to her. He doesn’t want her to know that he loves her. He wishes that she hates him. He gets emotional on seeing his Sona. They prove out that they are the best and can sacrifice their lives for each other. Rohit’s falls in big danger because of Nishi. Sonakshi rushes to save Rohit in her filmi dramatic and disguised way. Also, Tanya and Rohan share their pain that they can never become parents. Tanya wants Rohan’s baby. She feels incomplete without a baby. He gets worried for depressed Tanya.

Best comment by Sunaina:
Please start the show with season 2 from where it will end if you can’t stop the show going off air.