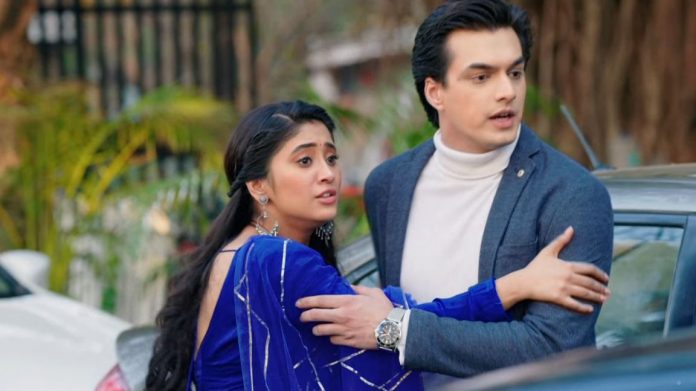 Yeh Rishta Peril for Kaira Manish unexpected stand Kartik calls the hacker Dhruv and asks him about any data recovery. Dhruv tells him that it couldn’t get possible to find any evidence, since the data recovery completely failed. Kartik doesn’t lose hope. He thinks if one option didn’t work, then there will be many options. Naira learns the upsetting news. She feels depressed. Kartik asks her not to worry, they will find some clue. Mohan apologizes to them, since he got nervous and couldn’t help them much. He tells that he is sure of Lav, Kush and Abhishek being the wrong doers, since he remembers well. Naira asks him not to be sorry, since fault is of Javeri, who has manipulated him to make him more nervous.

She is afraid that Javeri will weaken their case and get it closed in the next hearing. She also fears that if she win the case, then she will lose their family. She wants to change the family’s thinking. Kartik asks Naira to just focus on winning the case, the family will be compelled to know that they have fought the battle for truth. Naira recalls about the CCTV camera fixed outside the dance academy. She tells Kartik that they may find some evidence. He understands that Mohan might be captured by the camera and his statement would get weightage if they get the footage to the court.

Manish starts realizing the same that Naira is fighting for truth and justice. He thinks Naira isn’t wrong, but brave to support Trisha. He tells the family that they have fallen weak because of their love for Lav and Kush, that they are supporting them even when they know the boys have done a shameful act. Javeri angers Manish by speaking ill about Naira. He tells Goenkas that Naira maybe trying to get publicity, so that the fame helps her enter politics. He tells Manish that Naira isn’t a great soul to fight for justice, but holds a hidden agenda behind her innocent face. Manish condemns Javeri for maligning Naira’s image.

He takes a big stand for Naira, knowing she is right. He scolds Javeri for trying to poison his family bonds. Javeri threatens to leave the case. He asks Manish to hire any other lawyer for Lav and Kush. He tells that he will defend his son and save him some how. He thinks he must take some big step to save his son. He doesn’t want to tolerate Manish’s wrath. Manish isn’t scared of his threatening. He tells the family that Javeri might be the best lawyer, but not the right one for the case, since he is bringing personal enmity in between. He thinks to hire someone else, while Akhilesh refuses to this idea. Akhilesh is much worried for his sons.

He tells Manish that if Javeri leaves the case, then no other lawyer will be able to save Lav and Kush. He pleads to Manish to stop Javeri. He tells that Javeri will frame Lav and Kush to save Abhishek, which will ruin their lives. Javeri calls up the media and sends the reporters to the Goenkas house. He tells that he will give an interview for printing. Naira feels restless that Kartik is going away. She tries to stop him. She gets scared when he gets close to meet an accident. He assures that he will take care of himself.

He calms her fears. She prays for Kartik’s welfare. Naksh and Kartik reach the place to find the CCTV. They get to check the camera feeds to get help. Naira gets Trisha home. She finds the media and knows Trisha won’t like to face them. She asks Trisha to enter the house from the back door. She drives away to get some peace. Javeri meets Goenkas once again to know if they are ready to keep him on the case or hire someone else. He tells them that people and media will sympathize with Naira for being a great figure to fight the family for a stranger’s sake. He asks Manish and Akhilesh to take his advice and give wrong statement about her to ruin her growing fame. Manish tells that Naira is his Bahu, he will never defame her.

Javeri finds the entire family singing Naira’s praise. He thinks they will never accept his plan. He thinks to use Kairav to execute his plan. He brainwashes Kairav cleverly and sends him to the media. Kairav gets misled. The reporters question Kairav about Naira. Naira arrives home and finds Kairav answering the media. Kairav tells that Naira is wrong, she dislikes Lav and Kush and wants to send them to jail, while Manish is right to save them. Kairav tells that he is afraid to go to jail, he doesn’t want to be with Naira.

The reporters find it strange that a son is scared of his mom’s justice quest. They tag Naira as a failing mother for Kairav. Naira gets broken down. She hugs Kairav and confronts Goenkas for setting a wrong example. Javeri sends his aide to follow Kartik. He learns that Kartik has got a footage. He asks the man to stop Kartk some how. Kartik meets with an accident.

Reviewed Rating for this particular episode Yeh Rishta Peril for Kaira: 2/5
This rating is solely based on the opinion of the writer. You may post your take on the show in the comment section below.