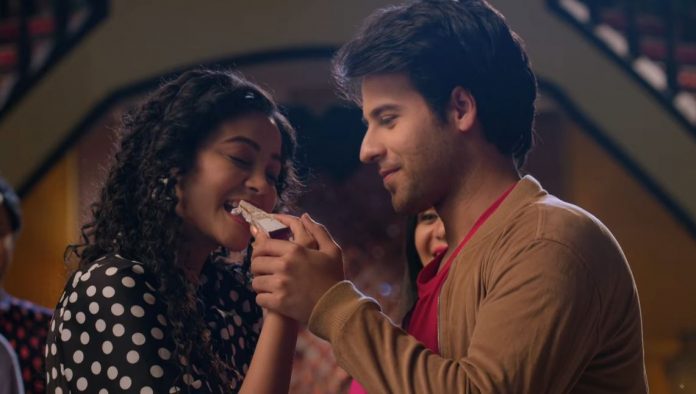 Rishtey Coming twist Starplus Kuhu birthday shockers Mishti finds Abir worried because of Kunal. She doesn’t want to tell him about Kuhu’s mistake. She just wishes that Kuhu realizes her mistake. Kuhu realizes her mistake. She feels much sorry since she can never harm Abir. He is like an elder brother to her. She never thought that he will hav the spiked coffee and fall sick. She swears that she didn’t even wish to hurt Mishti, she has changed her plan but still the pill fell into the coffee. She regrets for the fact that she stayed silent all the while and watched one of the family member falling ill. She wants Abir to get fine. She doesn’t want him to know her truth and hate her.

She thinks even Kunal won’t forgive her on knowing the truth. She wants Mishti to not tell her truth to anyone. Mishti tells Abir about Kuhu. She calls Maheshwaris home. Meenakshi expects Mishti to be creating a big scene by unmasking Kuhu. She expects a huge drama between both the sisters, just like she imagined. She wishes that both of them quarrel and prove her right, that they aren’t suitable for the family. Maheshwaris want to know why did Mishti call them. They get worried and think of different things. Kuhu feels that Mishti is going to expose her truth in front of Maheshwaris. She is much tensed.

Mishti tells them that she has to make a declaration, and reveal something about Kuhu. Meenakshi expects the ugly declaration, while Kuhu gets scared. Mishti proves them wrong by surprising Kuhu on her birthday. Mishti and Abir get a birthday cake and wish Kuhu. This brings much happiness in the family. Everyone wishes Kuhu. Abir thanks Mishti for the idea. Mishti told him about Kuhu’s birthday and the special arrangements to relieve everyone’s sorrow. Kuhu celebrates her birthday and wishes that her mistake stays hidden from the family. She doesn’t want to fall in anyone’s eyes. Mishti wants to keep the family united. She just wants peace and happiness.

Abir wants Kunal and Kuhu to value Parul. Kuhu feeds the cake to everyone. She thanks Mishti that she didn’t tell anyone her truth. She hugs Mishti. Mishti tells that she isn’t happy and can never forgive her for hurting Abir. Abir suspects Meenashi. He accuses her for triggering Kunal to blame Meenakshi. She tells him that Parul is trustworthy. She wants to know who is behind the spiked coffee. Abir asks her if she wants to blame Mishti. She asks him to believe her, she has accepted Mishti. Abir doesn’t trust her. He tells that she can never change.

He just wants everyone to be happy. He asks her not to find out anything and just let everyone stay in peace. Mishti makes Kunal apologize to Parul. Kunal shows his acceptance towards Parul. Mishti shows the moment to Abir and surprises him. She teases Abir with much love. Abir asks Parul to gift something good to Kuhu. Parul calls Kuhu her bahu and wants to gift her the best thing. Kuhu feels bad that she is a helper’s bahu. Abir and Mishti’s romantic moments are seen.

Kunal seeks Abir’s help in giving some gift to Kuhu. Abir asks him to think of something romantic. Mishti and Abir pull each other’s leg when it comes to romance. Abir takes it as a challenge. He tells her that he will kill her in front of the family. Abir and Mishti’s kissing challenge will be seen. Meenakshi prepares for holika dahan. She wants Kuhu to get against Mishti. She makes Kuhu insecure by giving Kunal’s company to Mishti. What will Kuhu do now? Keep reading.