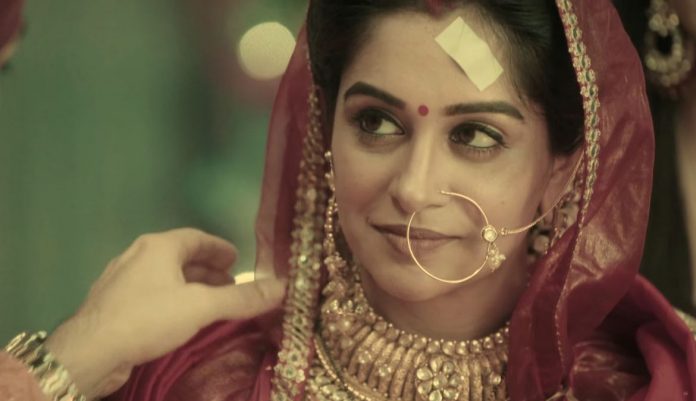 Kahaan Hum Sonakshi to Parvati Huge drama twists Rohit meets Sonakshi, while she is unconscious after the procedure. He gets nostalgic. He recalls the sweet memories of their first meet. He tells that she is a beautiful soul, he was amazed to see her selflessness, beauty and dedication. He cherishes their moments. He tells her that she has taught him to fall in love, she has even helped Raima, who was against her. He tells that he will always miss her, she isn’t in his life, but still he feels complete to get her love. He tells that she loved his family a lot and made sacrifices for them, but they couldn’t value her. He wants her to be happy and progressive.

He tells that she doesn’t deserve a bad life by living with Sippys, who have hurt her a lot by the insulting remarks. He doesn’t want her to leave her career. He tells that he doesn’t deserve a good wife like her. He praises her. He tells that she has much love in her heart. He likes the short and sweet journey with her. He tells her that though they didn’t spend much time, but their togetherness means a lifetime of joy for him. He values their moments. He feels he has lived well with her and now he can never meet her. Simmi wants him to tell the truth to Sonakshi, who has a right to know his love.

Rohit doesn’t want Sonakshi to fall weak after knowing his love. He wants Sonakshi to hate him more and more, since the hatred will boost her courage to move on with Sumit. He doesn’t want to face Sonakshi once she gets conscious. He wants to stay away from her life and silently support her. He shows a big heart and is ready to sacrifice his love. He goes away while Sonakshi sees him. She gets confused if he really came or not. Rohit goes back to his quarantine ward. On the other hand, Rohan meets Pari to make a request. He tells her that Tanya has accepted the truth of her miscarriage and also that she can never conceive again, but the truth is breaking her within.

He tells her that he doesn’t want Tanya to sink in the depression. He tells Pari that Tanya wants his baby. He asks Pari to give her baby to Tanya, they will raise the baby well as a Sippy. Pari doesn’t know what to do. She tells him that she will never give away her baby. She doesn’t want to fulfill his request. He begs her and puts her in a dilemma. Later, Suman and Sumit meet Sonakshi. They are relieved that Sonakshi is fine. Sonakshi makes them feel proud by risking her life for others. Suman feels proud to be Sonakshi’s mother. Sonakshi is just worried for Rohit. She asks Suman if Rohit got treated. She wants to know if the antidote is given to Rohit.

She tells that Rohit loves Sonakshi a lot, he saved her life post the accident and supported her always. Sumit tells Sonakshi that Rohit paid the lawyer and also gave statement to help in Suman’s bail. He reasons out Rohit’s real intentions behind his drama. Sonakshi wants to know what’s the reason what Rohit has concealed his love. Suman isn’t aware of the reason. Sonakshi wants Rohit to meet her and confess everything, so that she can sort it.

Suman tells that she regrets to misunderstand a real gem. Sonakshi gets thinking about Rohit. Doctor informs Nishi that antidote is prepared and tested on Sonakshi. He tells that they can save patients now. Nishi wants to earn much by selling the antidote. She misleads the doctor so that she can leave Rohit to die.

This Khkt is getting the best trp, don’t off air it, please I am a NEET aspirant, yet I take out time to watch this serial other than this I watch none, if this goes off air, I will not watch starplus itself. All useless serials would be left then. If you all cannot stop it from going off air, please start season 2 very soon.