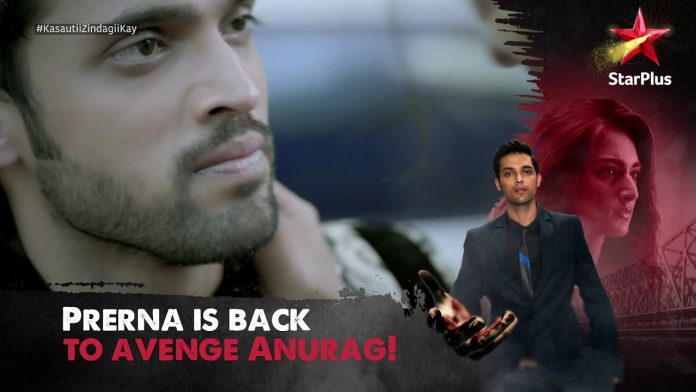 Kasautii New Season Komolika secret out AnuPre meet There are many new entries out of nowhere. Mohini’s eldest daughter and her children add up in the family. Also, there is a revelation that Diya is Komolika and Anurag’s daughter. Anurag and Komolika’s past opens up. Their secrets come out. Anurag goes to the airport to pick his elder sister Rakhi, and feels Prerna’s presence. He is much confused and then gets a hint from fate. Rakhi’s bag gets swapped with Prerna’s bag. Anurag happens to get a glimpse of Prerna, but doesn’t recognize her. He takes Rakhi’s bag. He speaks to Komolika and gets heard by Prerna. Prerna thinks its not the time to meet him still, since she will meet him in such a moment that he won’t get time to express the shock.

Prerna doesn’t turn to him and hides her identity. Anurag takes Rakhi to the Durga Maa pandal, decorated by Komolika. Mohini is much pleased with Komolika and accepted the evil Bahu, since she matches to her class and gave a grandchild as well. Mohini and Nivedita have no complains with Komolika, who completed the family by getting Diya in their lives. Everyone loves Komolika and admires her, as if they have forgotten Prerna’s existence. Rakhi meets her family and sons. She is more than happy to be with Basus after such a long time. Tapur and Nivedita share a bond of insecurity and comparison. Tapur doesn’t like Nivedita getting all the attention.

Anurag feels comfortable with Rakhi’s sons, whom he loves a lot. On the other hand, Prerna gets Kuki’s admission done in a reputed college. Principal tells Prerna that Kuki deserves to be in the college because of her amazing talents, the donation sent from Mr. Bajaj wasn’t needed. Prerna gets to know about the pandal and wants to go there. Kuki asks her to visit the pandal and come back soon. Veena has a stall in the pandal. Veena and Suman face humiliation because of Komolika. Komolika is much happy that she got rid of Prerna and became Basu’s bahu. Prerna happens to visit the same pandal.

There is another hit and miss between Anurag and Prerna. Anurag feels her around, but thinks it won’t be true. He thinks Prerna has gone too far and can never come back. He misses her and recalls the past, when he was threatened by Komolika and had to cheat Prerna. Komolika wants Anurag to accept her as wife. He denies to love her. He tells her that he got close to her while being intoxicated and made a mistake to accept her as his wife. He admits that Diya is their daughter. Komolika feels their marriage has accomplished because of Diya. He tells her that he will just love Prerna. He doesn’t want to do any drama.

Komolika reveals the big secret that she had used Viraj’s death video against Prerna and threatened to send her to jail. She had compelled Anurag to marry her if he had to save Prerna. She recalls the incident when she luckily got the video in some goon’s phone and used it to blackmail Anurag. She also revealed her true identity of Komolika to Anurag to scare him further. She had made Anurag cheat Prerna and break her belief on their love. She is happy that her plan worked well as she wanted.

She has succeeded to win Anurag. Anurag had faked his hatred for Prerna just to save her from jail. He is ready to do anything for Prerna’s sake. He didn’t wish Komolika to kill Prerna. He knows Prerna is alive and somewhere far, safe and happy. He doesn’t realize that she has come back for revenge.