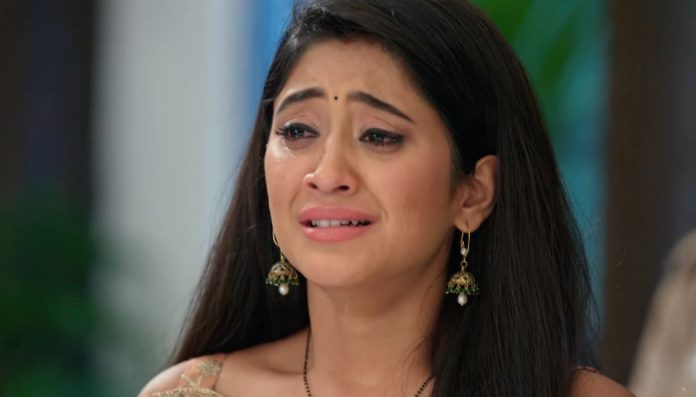 Yeh Rishta Shameful accuse Goenkas Naira stunned Naira swears to expose Javeri’s crime and get him punished, after Shivani informs her about Javeri’s involvement in Kartik’s accident. Naira rushes to see Kartik. She finds his state getting worse. She asks the doctor to allow her to be with Kartik. The doctor asks her to wait outside. She asks Kartik not to lose strength and fight for her sake. She tells him that she fell lonely and can’t fight the big battle alone. She wishes he recovers soon. The family is worried that he isn’t gaining consciousness. The family feels bad for Naira. Naira sees Javeri and goes to teach him a lesson. She didn’t wish him to make the court battle a personal enmity.

Javeri asks Goenkas about Kartik’s survival hope. This angers the family. He tells that he wants to know about Kartik’s recovery. He is also worried for the case, since his son’s name also got dragged. He tells Goenkas that he can call the best doctors for Kartik if they want his help. Naira reaches them and tells them that Javeri is behind the accident, he had attempted to kill Kartik. She tells that Javeri has sent the truck driver to kill Kartik. Javeri is much tensed. He denies the accusations. Naira tells him that she will not let him go free, she will get him punished, since she has got to know this shocking news from her trusted source. Javeri asks Manish to control his Bahu, who seems to have lost her mental balance because of the stress.

She tells that Naira is accusing him when he is innocent, she is getting mad on seeing her husband critical. She tells him that she will get proof against him, the police has already caught the truck driver. Javeri tells Goenkas that they can file complaint against him if they don’t trust him. He quickly leaves since he doesn’t want to get more interrogated by Naira or Goenkas. Naksh and Shivani learn about the driver’s statement. They inform Naira that driver has admitted the crime and also told Javeri’s name, since Javeri hired him for the accident plan. Naira tells Kartik that she will get Javeri punished.

Later, Surekha meets Naira and shows concern for Kartik. She requests Naira to just withdraw the case which led them into this horrible situation. She tells that people are blaming Naira for the accident, which isn’t wrong completely. She asks Naira to think how the court case is breaking their family. She pleads Naira to step back. She asks Naira if she can promise it. Naira refuses to Surekha’s request. She wants justice for Trisha and Kartik as well. The family reaches the court for the hearing. Javeri is targeted by Shivani and Naira. Shivani proves that Javeri hired the driver to scare the witness Mohan, who has run away to save his life. She tells that Javeri is playing evil to win the case.

She calls the driver to testify. The driver is bribed by Javeri and lies to the court. Shivani shows the interrogation footage. She tells that the driver is lying right now. Javeri manipulates the witness and proof. He proves himself right. Kartik gets critical. Doctor summons Naira who can stabilize Kartik. Suwarna worries for her son. Naira loses her cool seeing Javeri winning the case. She grabs his collar and gets violent. Naira accuses him for attempting to kill Kartik. Javeri gets too personal and tries to prove her mentally unstable. He tells her that he has a proof that she is mentally not fit and hallucinates. He tells that Naira is accusing him falsely.

He saves his name cleverly. Naira cries and falls weak. She is thrown out of the court. Goenkas feels bad for her. Naira misses Kartik. Javeri tells the court that Kartik can prove Naira’s mentally unstable state. He gets attacking Naira’s weakness. Kartik reaches the court on a wheelchair, shocking Naira and Goenkas. He supports his wife and also accuses Javeri. What will happen next? Keep reading.