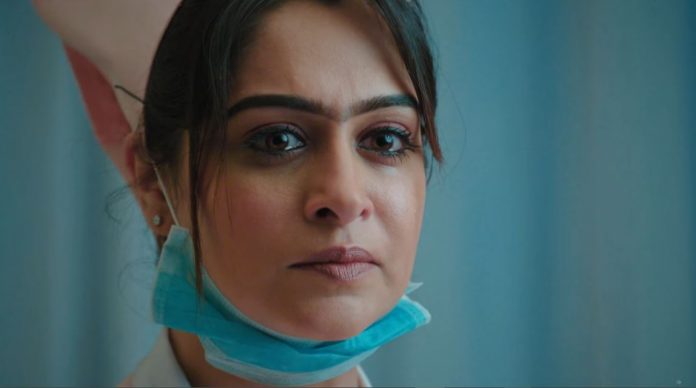 Kahaan Hum Superb Sonakshi pulls huge plan for Nishi Sonakshi has succeeded to save her Rohit’s life. She fails Nishi’s plans. Nishi receives a shock to know that Rohit is very much alive and fine. She thinks how did Roht get the antidote. She pretends happy, while Veena is grateful to Nishi. She gets the credit for Rohit’s survival. She is much frustrated within. She tries to analyze if Dr Mathur or nurse Parvati are behind this. She summons them to get answers. Sonakshi was stuck in the lift when Rohit was declared dead by the doctor. She managed to get help from Tulsi and reach Rohit, only to know that he is no more. Sonakshi revives Rohit back to him just like Parvati from KPK scene.

She creates a miracle by saving him. She assists the doctor in giving the antidote to Rohit, which stabilizes him. She is thankful to the doctor, who in turn praises her for saving Rohit. She asks the doctor to hide from Nishi for some days. The family fails to meet Rohit. Tulsi asks them to meet Rohit after some time. Sonakshi spends time with Rohit. She cherishes their lovely memories. Nishi learns that Dr. Mathur has run away from the hospital, but left a letter for her. She also doubts nurse Parvati.

She reads Dr. Mathur’s confession that he has given the antidote to Rohit after knowing her crime. She gets angry that Dr. Mathur saved Rohit. Her doubt on nurse Parvati gets down. Sonakshi as Parvati irritates her further, by praising her for saving Rohit. Nishi wanted Rohit to die. She asks Parvati to get out of her sight. She thinks her big plan has failed. Sonakshi is happy that Nishi is defeated.

On the other hand, Tanya and Pari think of baby names. They both have different options and take Rohan’s help to decide. Rohan decides Pari’s choice and takes good care of her. Tanya feels bad, but stays silent for the sake of the baby. Pari is happy that her plan is working. She wants Tanya to leave from their lives.

Sonakshi finds Veena with Rohit. She connects with her once again. Veena gets emotional about her first child. She tells Sonakshi that she wants to talk to her son. Sonakshi tells that Rohit will get conscious in the morning, so its better that Veena takes some rest at home till then. She convinces Veena to go home and return in the morning. Veena hugs her and finds her genuinely concerned. She learns that she is nurse Parvati. She recalls Sonakshi for a minute. Sonakshi promises to call her when he gets conscious. Veena makes a leave. Later, Rohit gets conscious after expressing love for Sonakshi. Sonakshi also confesses love to him.

He again pretends to hate her and asks her to leave. Sonakshi plays a suicide drama to get the truth out of him. She tells that if he hates her and doesn’t want her, then she will die, since she loves him a lot and can’t live without him. Rohit stops her from harming herself. He tells that he is helpless to make her away from himself just because of Nishi, who is threatening him about Naren’s life. Sonakshi wants to know the matter. He reveals the entire incident how Nishi harmed Naren and then ruined Sonakshi’s life too. Sonakshi can’t believe that Nishi made Rohit divorce her.

She tells that Nishi tried to kill him as well by not letting the antidote reach him. She informs that Nishi is misleading Veena. She promises to get Nishi exposed and punished. She wants his support. Rohit tells that he is always with her. They get together to expose Nishi’s plan. Rohit takes Sonakshi home by a work excuse. Pooja finds Sonakshi and opposes her stay. Rohit and Sonakshi reveal Nishi’s truth to Pooja and get her on team.

The chemistry between the lead actors is mind blowing. It doesn’t seem like acting its as if they are living it. This show has to go on. I keep sharing their romantic interludes with my friends. Starplus you are doing a great injustice to KHKT. Please don’t go off air.