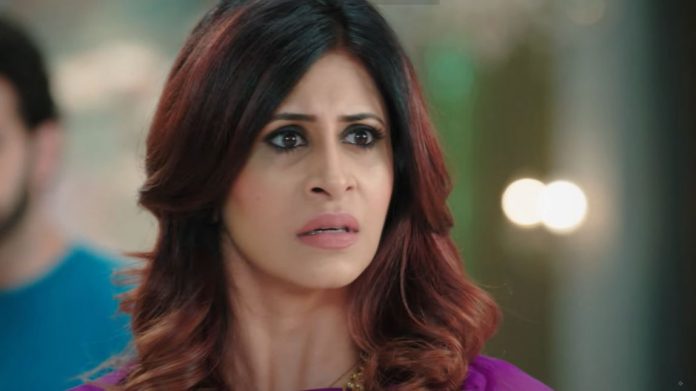 Kahaan Hum Nishi exposed Naren falls in danger Pooja goes hyper on knowing Sonakshi’s disguise. She asks Sonakshi to get out of the house. Rohit tells her that Sonakshi is innocent and framed by Nishi, who had tried to kill Naren. Pooja can’t believe that the woman who raised her with so much love can have hatred and greed in her heart. She opposes Sonakshi. She blames Sonakshi for being a greedy woman to come back to Rohit for the sake of money. She warns Rohit to not fall into Sonakshi’s trap again. Rohit tells Pooja that Sonakshi saved his life, she has been sacrificing a lot for the family. He tells Pooja that he loves Sonakshi so much that he can never think of getting separated, still Nishi forced him to divorce Sonakshi.

Sonakshi also adds that she didn’t get a penny from Sippys even after the divorce, since the prenuptial agreement was made void by Nishi. She clears that if she was here for money, then she would have not helped Rohit. Pooja calms down after hearing them, but still stays unconvinced. She wants to explain further. Vimmi brings Naren there. She tells them that Naren asked her to get him to Sonakshi, after identifying her in Parvati’s disguise. Sonakshi meets Naren and consoles him. She tells him that he shouldn’t cry now, she will take revenge on Nishi for all his tears and pain. She swears to not leave Nishi this time.

Naren blesses Sonakshi. Pooja asks Naren if Nishi is really a criminal, if she tried to kill him. Naren winks to confirm that its really truth. Pooja is broken down by this shocking truth. She tells Rohit that she will help him in saving Naren. Rohit tells her that Nishi is controlling Naren’s pacemaker by an app in her phone, she can switch off the pacemaker any time and kill Naren. Pooja offers a solution. She tells him that she will hack Nishi’s phone. Rohit and Sonakshi have already got the phone. They pass it to Pooja and try to keep Nishi engaged for more time.

Rohit learns that Pooja has skills to hack the phone and is surprised. Pooja hacks the phone, but doesn’t find any such app that controls the pacemaker. Sonakshi tries to cover up the fact that Nishi’s phone is stolen. Nishi is troubled by the sudden diarrhea. She gets bitter medicine for her. Nishi refuses to have it. Sonakshi irritates her and keeps her engaged. She asks Sonakshi to get allopathic medicines for her, since she is a professional nurse. Sonakshi gets help from Rohit and answers Nishi’s questions about the medicines. Nishi tests her knowledge. Sonakshi gets saved. She thanks Rohit, who is thankful to her smartness. He praises Sonakshi a lot.

Nishi finds her phone missing and gets desperate to have it back. She calls on her phone and thinks who has it. Sonakshi makes excuses to avoid her suspicion. She fails to stop Nishi. Yash and Veena try to call a doctor for her. Pooja takes the phone to Nishi and lies that she took her phone to call the doctor for her aid. She tells Rohit that maybe some other device contains the pacemaker app. Sonakshi and Rohit’s sign exchange gets seen by Nishi. Nishi doubts that Parvati is Sonakshi. She rushes to the hospital and gets treated for her diarrhea. She then heads to Rastogi house to meet Sonakshi.

Elsewhere, Pari makes Tanya insecure by interfering in her marriage. Tanya realizes Pari is snatching Rohan. She warns Pari. Pari provokes her and then acts in front of Rohan to make him against Tanya. Rohan gets yelling at Tanya and calls her selfish. He supports Pari. This rages Tanya. She feels humiliated and leaves the house. Nishi faces Suman, who insults her in tons. Nishi gets angered and gets unable to face more taunts. She sees Sonakshi in her house. She observes Sonakshi and realizes that she was in Parvati’s get up. She leaves from there.

Rohit and Sonakshi think that Nishi is convinced by their drama. Suman wanted to slap Nishi for ruining her children’s lives. Sonakshi tells Suman that Rohit is with her now and nothing else matters. Nishi returns home and finds a big drama going on. Veena learns that Tanya left the house just because of Pari. She questions Rohan the reason for Tanya’s leaving. She slaps him, when he shamelessly tells that Tanya is jealous of Pari. Rohan speaks ill about Tanya. He wants Pari in his life, who is giving her child to his family. He favors Pari, which angers Veena.

Veena tells that she will not let any outsider ruin his family. Nishi sees Sonakshi and splashes water on her. She tells Veena that she also doesn’t want anyone to ruin their family and happiness. She tells that Sonakshi has been cheating them for some motive. Veena is shocked to see Sonakshi. Sippys demand an answer. Sonakshi doesn’t want them to misunderstand her again. Nishi exposes Sonakshi to prove her intentions wrong. Sonakshi breaks her silence. She tells them that she is with them since she is saving Rohit from Nishi.

She asks Nishi if she has a problem that Rohit is alive. She accuses Nishi for trying to kill Rohit. She tells that Nishi didn’t give any antidote to Rohit. This shocks Veena. Nishi gets revengeful against Ronakshi and plans to kill Naren.