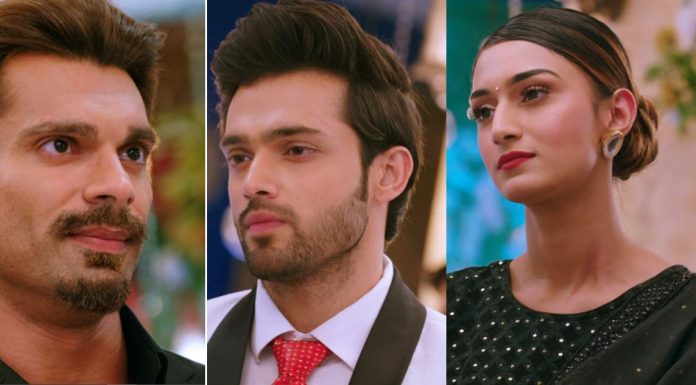 Kasautii Bajaj Starplus Prerna Shocking meet with Basus Anurag and Prerna are stuck inside the lift. He gets Komolika’s call and romantically talks to her. He tells her that he will be coming home in some time. She wants to know who is accompanying him. He makes Prerna jealous. Mr. Bajaj calls Prerna to take her welfare. She tells him that she is absolutely fine. He tells that he is going to send help. She asks him not to worry for her. He gets the problem solved for her. Anurag tries to help Prerna in opening the lift door. She gets hurt.

He doesn’t think that she will trust him if he tells her the truth. He isn’t sure of her reaction. He thinks its better that she hates him. They come out of the lift. They leave from the building. Kuki asks Prerna if she is fine. Prerna doesn’t want to answer him. Anurag goes with Kaushik. Kuki feels Prerna is behaving strange since she met Anurag. Prerna drops Kuki to her college. Anurag drops Kaushik to the same college.

Later, Anurag reaches home. He gets questioned by his family, who want to know who defeated him in the auction. He doesn’t want Komolika to hurt Prerna. He doesn’t tell Prerna’s name. He tells that he will make a huge mall as per his old plan. He plans to throw a party to welcome his new investor. Komolika doesn’t want to tolerate his defeat. Nivedita asks her not to complicate things. Prerna follows Veena and misses out. Mr. Bajaj calls her and finds her disturbed. He tells that he knows her really well.

She tells about spotting Veena at the signal. He tells that she should meet Veena. She tells that she will ruin Anurag first and then meet Veena, after attaining peace. He asks if Veena stays in her old house. She is sure that Veena would stay there, since she has no other place to live. She wants him to come to Kolkata soon. He thinks its time to go to her. Kuki misunderstands Kaushik and goes to the police to complain about him. A girl lies about him. Kuki believes the girl. Kaushik faces an arrest because of the girls. They go to the police station and quarrel. Kaushik asks the girl not to cheat him.

The girl gives the statement in his favor. Inspector scolds Kuki for filing wrong complaints to mislead the police. Kuki apologizes. The girl tells Kuki that Kaushik wasn’t teasing her, she loves him and he rejected her love. She realizes her mistake to get him arrested. Kaushik asks Kuki to apologize if she wants. Kuki thinks she has misunderstood Kaushik. Anurag likes Prerna to hate him.

He thinks she has become strong, he can’t believe that she defeated him in business. Prerna plans to give him more shocks. Mohini and Nivedita regret to become Komolika’s puppets. They share their pain with Rakhi, who wasn’t aware that Komolika is torturing them. Mohini tells that she doesn’t rule over Basu mansion anymore, since Komolika owns everything. She regrets to fall in Komolika’s trap. Mohini deeply misses her old days. Rakhi and Nivedita pacify her. Mohini gets to pay for her mistakes. Mr. Bajaj and Prerna make a grand entry in Anurag’s party. Komolika and Basus get a huge shock. Mr. Bajaj declares that Prerna is of him now, a strong independent woman.