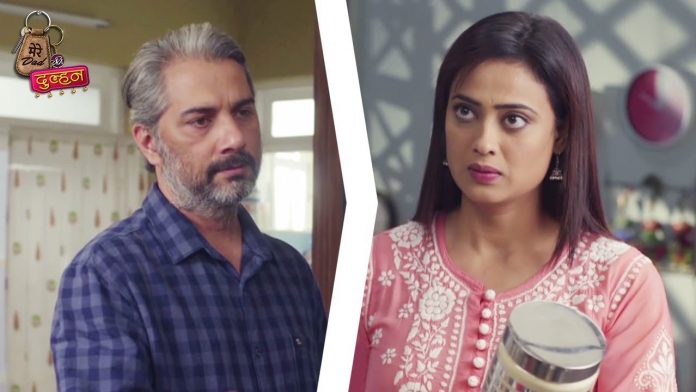 Sony Hit Mere Dad Ki Dulhan Hilarious Lathmar Holi Amber wants Ghanshyam to find Pammi any way. Amber tells Guneet that Pammi is fine, she is with some people. He wishes her happy holi. Guneet is relieved that her mum is safe. She wishes him too. She wants to know his surprising side. She can’t digest his change. She tells that he is smiling and wishing politely, which is due to his lover. She knows that the woman is his online friend. She doesn’t know the woman’s identity.

She is sure to know it soon. She thinks the woman will be special to bring good changes in him. She asks him to make her meet his special person, since they are also friends now. They spend the time near the bonfire.

Guneet falls asleep. Amber doesn’t want to sleep and snore, so that she doesn’t get disturbed. He stays awake by much difficulty. He gets surprised when she snores. He controls his laughter. Amber and Guneet finally reach Mathura. They ask about Pammi and show the picture. Nia and Kajal attend a holi party. Nia meets Kabeer and reminisces the past. They have a dance with their friends. They enjoy the function. Kabir wishes that she never broke their friendship because of We net issues. Kabir loves Nia from the bottom of his heart. He tells Nia that they are business rivals now. Swara likes to see their friendship.

She tells that she was waiting for them to get back to friendship. Swara tells that she has decided to work with either of them. She thinks her decision shouldn’t hurt them now. Guneet learns that Pammi was with the foreigners and impressed them by her cool attitude. Amber gets the thandai and refuses to have it. He then decides to have it so that he finds Pammi. She asks Guneet to have thandai as well. Amber and Guneet dance with the people and try to find Pammi.

They get intoxicated soon and enjoy the holi celebrations in true sense. Guneet consumes more thandai and goes crazy. They completely forget their goal to find Pammi. Swara decides to accept contract from Wenet. Guneet and Amber play Lathmar holi and get into a hilarious situation, on finding Pammi.