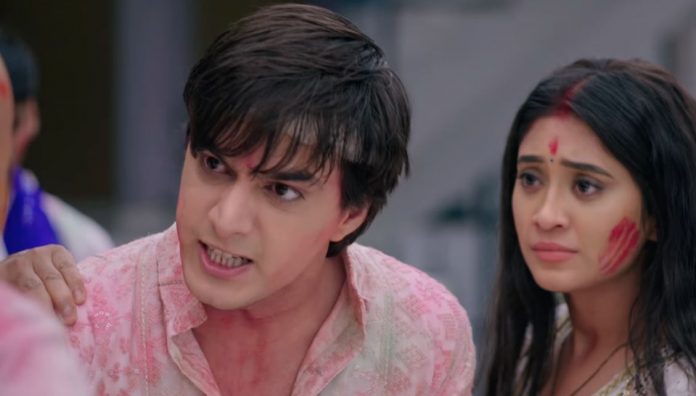 Starplus Kartik Naira Upcoming Yeh Rishta twists Tonight Naira feels suffocated and loses out in her struggles. She hallucinates when she longs to meet Kartik and Kairav in her final time. She wishes to hug them once before she dies. She visualizes a meeting with them and turns emotional. She wants them to take care of each other, since she is going away from them. She gets hindered to reach them. She faints down. Vansh and Kairav look for the fog machine.

They ask the Goenka staff and also family members. They want the fog machine to get some pictures clicked with the fog clouds. Dadi wants the family to be happy always. Suwarna tells that Kartik and Naira will soon return home and things will get normal. Dadi asks her to convince Kartik and Naira to return home. Kartik and Naksh try hard to find Naira. Kartik suspects that Javeri is behind her disappearance.

He doesn’t share anything with Manish. Manish worries on seeing his son dealing with some problem alone. Vansh and Kairav find the machine and rush to get it. They find it tied to the heavy door covering the pit. They try to pull up the door. They see the fog smoke inside the pit. They try to get pictures. They come across Naira and receive a big shock. Kairav shouts for help.

Kartik gets restless on feeling Naira landing in trouble. He hears her name being called out by Kairav in a tensed situation. He gets negative thoughts and rushes to Kairav. Goenkas find Naira lying in the pit. Kartik is shell shocked and jumps inside the pit to help her. He cries for her. Goenkas rescue Naira. Naksh panics for her sister’s life. He wants to know the culprit. Goenkas take her home and call a doctor for her. Kartik pleads Naira to wake up and talk to her. He tells that he didn’t see her in the pit before.

He was madly searching for her. Naira gains consciousness. She is more than happy to find herself alive and with her family. The family questions her to know who is responsible for her accident. Naira tells them that someone tried to kill her. They want to know the culprit’s name so that they punish him. Kartik knows Javeri is behind this, since he has seen Javeri’s watch inside the pit. Manish catches Javeri and Abhishek, who had seen the rescue drama and tried to run away to save themselves. Manish tells the family that Javeri has done the crime. The family can’t believe this. Naira accuses Javeri and tries to unmask him.

She tells them that Javeri and Abhishek tried to kill her. Kartik vents anger on Javeri. Kartik and Naira yell at Javeri and shame him for his act. Javeri denies the blames. He laughs on them. He asks who will believe them if they have no proof. The family gets united to show their trust on Naira. This shocks Javeri. Naira tells that she will get Javeri punished for his crimes. She tries to make Goenkas realize their mistake. She reprimands Lav and Kush for their huge crime to do wrong and then drag the family into supporting them. Keep reading.