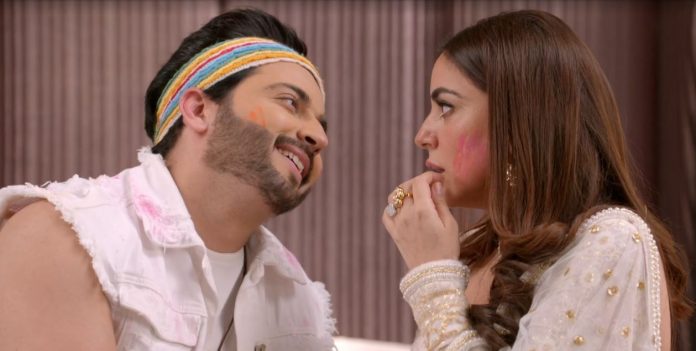 Karan Preeta confession Kundali happy times upcoming Mahira is angered that Shrishti locked them. She tries to take help. Sherlyn stops her and tells her that they should worry about Karan, who is with Preeta in intoxicated state. Mahira cries to think of their romance. Karan and Preeta have a romantic moment, and accept that they are married. They have a cute banter about their long nose, that spoils their romance. He feels they are made for each other. He proposes her for marriage. She refuses to him since he never confessed love to her. He asks if she doesn’t like him. She tells that she likes him, but doesn’t find him so charming.

He tells her that he will propose her with love, he will praise her beauty as well. He compliments her with much affection. She wants to hear more pleasant words from him. He tells that she is his life savior, his support and his love. She gets emotional when he confesses that he loves her. They share a kiss and get happy in the special moment. Mahira goes mad thinking of their closeness. Sherlyn tries to call Rishabh to take help. They end up arguing. They blame each other in the critical time. Sherlyn tells that she can’t call anyone from the family to take help, since they will be questioned for getting locked in the storeroom.

She thinks to call Prithvi to take help, since he is also in Luthra house. Prithvi feels intoxicated. He realizes that he has consumed a spiked drink. He gets Sherlyn’s voice message. He rushes to help Sherlyn. She asks him to open the door bolt. Prithvi frees them. Mahira asks Sherlyn about Prithvi. Sherlyn tells that she will introduce him later. She doesn’t want him to create a problem for her. She locks him up to save herself. Preeta is stunned by the kiss and asks Karan to limit himself. She asks him not to kiss her. He tells that he can kiss anyone, being the Karan Luthra. She gets miffed by his silly words.

He tells that she is his love. He asks her to admit that she is feeling jealous. She doesn’t want him to tease her. Karan tells her that he wants to hear the three magical words from her. He asks her not to be shy. She asks him to close eyes and then hear it. He finds her naughty. She beats him and tells him that the three magical words, Behave Karan Luthra. Karan gets upset. He wants to settle scores by continuing the pillow fight. Sherlyn and Mahira rush to see Karan and Preeta. Karan doesn’t want Preeta to go.

Sarla wants them to understand that Luthras aren’t totally good, there are some bad people as well, who will hurt them. She worries for her daughters and wants to protect them. Mahira and Sherlyn misunderstand Karan and Preeta’s situation and get a shocker to see their romance. Karan and Preeta tell that they are husband and wife. Mahesh threatens Sherlyn that he will tell her truth to everyone. Sherlyn gets too scared.

Reviewed Rating for this particular episode: 4/5 Preeran romance
This rating is solely based on the opinion of the writer. You may post your take on the show in the comment section below.