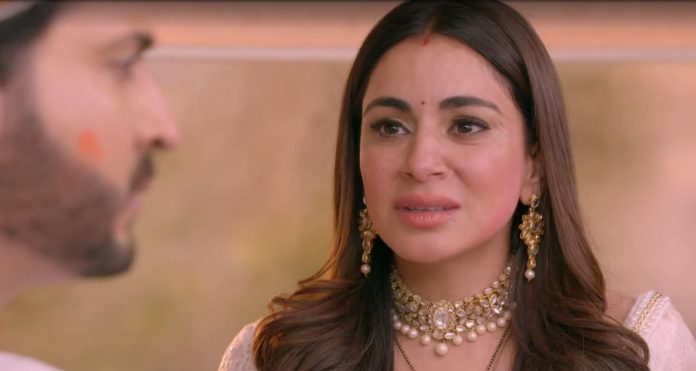 Kundali Upcoming Kumkum Tonight frustrating twists Abhi and Pragya’s never ending hits and miss continue to add up frustrating and dull moments in the track. Pragya goes to meet Abhi and Vikram on Pallavi’s insistence. Abhi and Vikram are much drunk and fall asleep. Pallavi tries hard to wake up Vikram so that he can meet Pragya. Pragya asks her to let them sleep, she will meet them some other way. Vikram asks Pallavi to go, he won’t get up. Abhi hears Pragya’s voice and reacts. He wakes up and shouts Pragya, after she leaves from the room. They get into never meet zone.

On the other hand, Prachi wants to tell Pragya about Ranbir’s love confession. She thinks if Ranbir really meant his words, since he was drunk. She also knows that he would just speak the truth in the intoxicated state. She gets confused over accepting Ranbir’s proposal or not.

Kundali Bhagya:
Preeta and Shrishti return home with pale and sad faces after Karan fumes on Preeta and blames her for harming Mahesh. They didn’t expect Karan to change sides once again. Karan doesn’t know what is happening that its always Preeta around Mahesh when the latter gets hurt. Rishabh tries to explain that Preeta is innocent. Sarla finds her daughters upset and asks them the matter. Shrishti reveals the new ugly blame on Preeta posed by Luthra family. She tells Sarla that Karan also accused Preeta. Sarla gets shattered once again.

She tells them that if they dare go to meet Luthras, then they shall find her dead. She ties them in a promise that they will not keep any contact with Luthras. Preeta sheds tears that she lost Karan once again. Kareena warns Rakhi and Rishabh against helping Preeta. She tells that Preeta has always brought bad fate for them. She reminds Karan that Aroras are unlucky for them and he had married Preeta just for the sake of revenge. She doesn’t want Karan to fall into Preeta’s tear trap. She tells them that Karan shouldn’t help Preeta this time. Sherlyn and Mahira feel they have conquered. Does Karan really not believe Preeta or playing a drama to catch the real culprit? Keep reading.