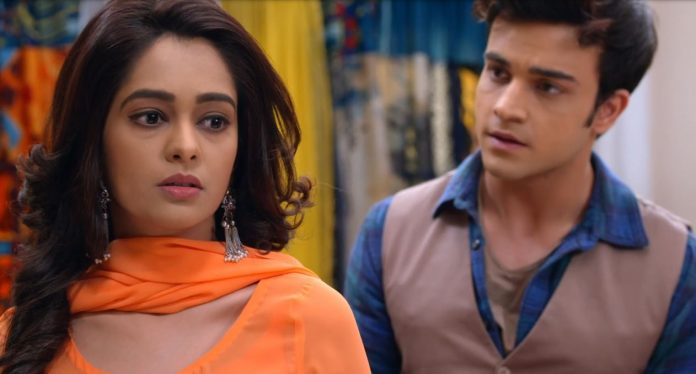 Kumkum promising love Prachi Ranbir confession Ranbir wants to tell Prachi that he is stuck in a big mess. Shahana asks Prachi not to trouble Ranbir by disconnecting his calls. Prachi doesn’t want to talk to him. She doesn’t want to listen to Ranbir or Shahana. Sarita tells Prachi that she is happy to see Shahana locked in the room. Prachi asks Shahana to stay quiet. Ranbir comes to meet Prachi to speak to her. Prachi has no way to avoid him now. He tells her that he wants to talk to her.

Sarita asks him to feel like home. Shahana hears his voice and gets happy. Ranbir wants to know Prachi’s reply. He recalls her promise of forever support. He tells her that he has come to tell her about the new problem. Prachi tells Shahana that Ranbir has come. Ranbir and Prachi get into an argument. Prachi throws him out of the house. Ranbir wants to know why is she so angry. He refuses to go and comes back again, even when she pulls him.

She asks Ranbir to not talk to her. Ranbir tells Sarita that he won’t lose and talk to Prachi. Sarita tells Shahana that Ranbir and Prachi have cute love fights. Maya gets ready to visit the mall and meet Ranbir. She feels she is in love with Ranbir. Prachi asks Ranbir to just leave. Ranbir tells her that he remembers that he has proposed her. She tells him that his proposal has put her in an odd situation. She feels she knows him well, he can’t make fun of that moment. He tells her that he loves her, he doesn’t have any hesitation to accept it on her face. She tells him that she doesn’t want to hear it. She asks him to talk something else.

He doesn’t have any problem if she falls in love with someone else, since he loves her and can get happiness in her happiness. He just wants her to be his friend. He relieves her from the burden of giving an answer. He asks her not to run away to avoid him, maybe he doesn’t deserve her. Prachi tells him that she is much relieved, since she didn’t wish him to force her to say I love you to him. He tells her that he isn’t such a mad lover. He tells that he knows her well, he wants her to be with him, his love isn’t any compulsion. He makes her feel comfortable. He wants her to love him, but doesn’t want to force his love on her. He cherishes his first love.

He asks Prachi to accompany him to the mall to save him from Maya. Prachi agrees to him. He asks her if she trusts him. She tells that she doesn’t trust him. He tells that he loves her and wants to win her trust. She doesn’t want to listen to his love confession again. He tells that they have to prove this as truth to Maya’s family, Maya will hate him when she sees them romancing. Ranbir and Prachi greet Maya and her mum. Maya is angry to see Prachi along with him. Ranbir acts strange. He tells that he didn’t know that Prachi is around. Ranbir finds a new way to deal with Chobeys.