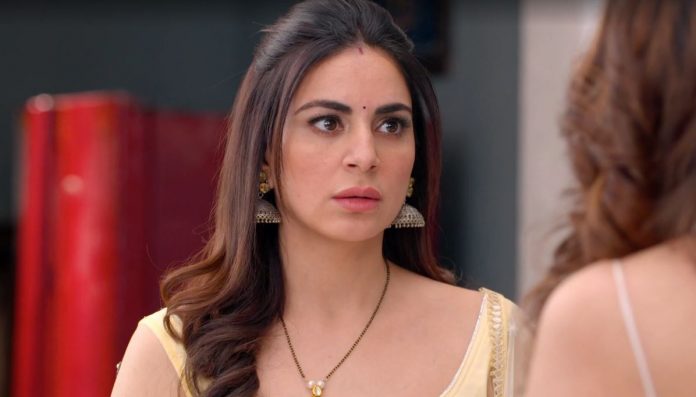 Kundali Punching bag Preeta Mahira pays shocking visit Rishabh lightens his heart by sharing the shocking matter with Mahesh. He tells Mahesh that they need him a lot, he can make things right. He doesn’t want Karan to marry Mahira. He tells that Preeta can keep Karan happy, she can bring a good change in him, she is the right person for him. He tells that Preeta should be Karan’s wife. He shares his emotions and complains about Karan to Mahesh. Karan gets angry on Preeta for hurting Mahesh once again. Rishabh asks Karan not to go crazy this way.

Karan is angered that Mahesh is in coma once again, all because of Preeta. He doesn’t want to listen to anything. Rishabh tells that Preeta can’t cheat them. He wants Mahesh to please come back to them. Preeta sinks in Karan’s memories. She doesn’t want to love him again. She weeps a lot and thinks of Mahesh’s accident for which Luthras blamed her. Karan recalls the romantic time spent with Preeta. He never imagined that he will see such a sorrowful day after spending some time in peace. He wanted to make a new start of life with Preeta. Sherlyn gets too happy to bring Mahira in the family. She handles the haldi arrangements.

Ramona compliments Sherlyn. She asks Sherlyn about the arrangements. Sherlyn tells that everything is ready. Ramona is happy for her daughter’s dream getting true. Sherlyn thinks that Ramona doesn’t know how devilish is Mahira. She knows Mahira’s real evil talent. They go to see Mahira. They find her missing. They wonder where did she go without informing them. Sherlyn thinks Mahira should have at least told her about it.

Rakhi gets jewellery for Mahira. She learns that Mahira is missing. She asks Ramona to search for Mahira in the entire house. Ramona panics since Mahira isn’t at home. Rakhi thinks Mahira has gone to the temple to get blessings. She tells them that Mahira has told her about the temple visit. Ramona thinks why didn’t Mahira tell her. She tells that Mahira never goes out without informing her. She feels something is wrong. Shrishti becomes Preeta’s support system. She asks Preeta to have tea. Mahira pays a visit to Arora house. She tries to insult Preeta. Shrishti counters her and asks her to leave. Preeta lets Mahira vent out her poison.

Kareena and Dadi get worried to know that Mahira is missing. Ramona tells them that Mahira didn’t tell her anything before going. Kritika asks them if Mahira left from the marriage functions purposely. She asks Ramona to check if Mahira left any letter. Sherlyn tells them that Mahira maybe in some big trouble. She asks Luthras to find out Mahira. Ramona blames Preeta once again. She tells that maybe Preeta has kidnapped Mahira. She makes Luthras suspect Preeta. She tells that Preeta hates Mahira and maybe she got a chance to harm Mahira.