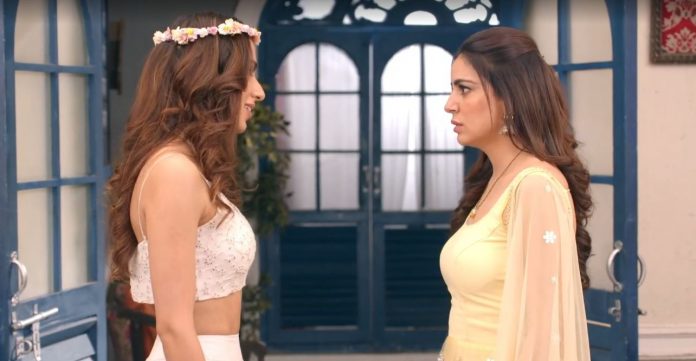 Kundali Disgusting Mahira shocks Preeta with truth Ramona creates a huge scene when Mahira goes missing from the house. Kareena tells that she doesn’t trust Shrishti and Preeta, not even Sarla. She also doubts that Preeta has done some harm to Mahira. Rakhi tells that Preeta has nothing to do with the marriage now. She doesn’t think Preeta can come home and kidnap Mahira. Kareena tells Ramona that she knows Aroras, who can fall to any level for revenge.

She scares them that Mahira would be in trouble. She wants to inform the police. Rakhi asks Kareena not to make a big issue for a small thing. She tells that Mahira would have gone to the temple, since she has informed them about it. Kareena asks Rakhi not to support Aroras always. She tells that Mahira maybe not there at the temple. She asks Kritika to go and check at the temple, bring Mahira home if she is really there. Rakhi doesn’t want Ramona to worry. On the other hand, Preeta stops Shrishti from kicking out Mahira.

She lets Mahira inside the house to know the reason for her coming. Mahira laughs on Preeta by telling about her marriage. Shrishti doesn’t want the negative energy at her home. Preeta wants Shrishti go go to the room. Shrishti refuses to leave Preeta alone. She asks Mahira to get out of her house. Mahira doesn’t want Shrishti to insult her. She tells that she has heard a lot about Aroras, who make friendly relations with everyone. She asks Shrishti not to insult the guest. Shrishti accuses her for trapping Preeta in the false blame.

Shrishti and Mahira get into an argument. Preeta asks Mahira to talk to her one-to-one. She sends Shrishti. She asks Mahira about her coming. Mahira tells her that she has come to celebrate her happiness with her enemy, whose life is ruined. She tells that Luthras love her a lot. She thanks Preeta for giving her a great day in her life. She tells that Karan wanted to marry her after Mahesh’s recovery, but its good that Preeta pushed him down the stairs. Preeta tells that she won’t believe her silly reason. She asks Mahira to stop the drama and tell the real reason for coming.

She calls Mahira an obsessed girl. She asks Mahira not to blame her for Mahesh’s accident. Mahira asks her not to cry and become a victim in front of Karan to get his sympathy. She insults Preeta and then gets happy to give the shocking news about Mahesh. She tells that she has lied to the family about Preeta harming Mahesh, just to cover up her own mistake. She accepts that she has harmed Mahesh intentionally and shocks Preeta.