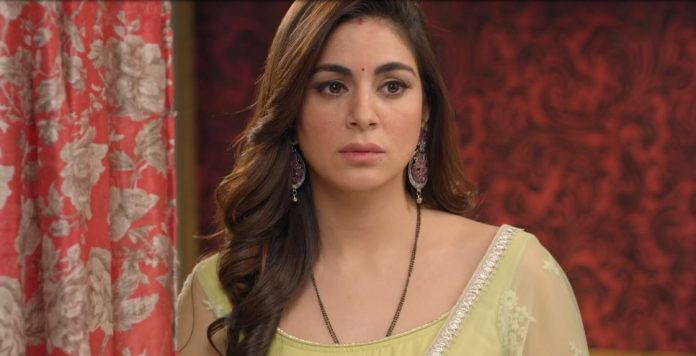 Kundali Preeta harsh stunned Mahesh accident truth out Mahira tells Preeta that she wanted Luthras to take a strong stand against Preeta and lied to everyone. Preeta wants to know Mahira’s desperate measures. She asks her not to hurt Karan. She tells that Karan won’t marry her willingly. Mahira enjoys the sight of her jealousy. She tells that Karan has chosen her for the marriage.

Mahira admits that she can kill anyone for Karan’s sake, she has pushed down Mahesh from the stairs. Preeta is much shocked. Mahira asks her not to suspect her, and get certain. She openly declares that she has pushed Mahesh down the stairs, none from Luthra family knows this and Preeta got the blame easily. She gets on cloud nine that Karan is marrying her. Shrishti overhears Mahira’s confession. She fails to record anything.

Elsewhere, Kritika goes to find Mahira. She comes across Sarla and Janki. She apologizes. Sarla asks Kritika not to cheat them by acting sweet. Kritika feels sorry for Aroras. She looks for Mahira. Preeta cries for Mahesh, who slipped in coma once again. She reprimands Mahira for harming Karan’s dad Mahesh. Mahira tells her that she didn’t do this alone, Sherlyn has helped her in doing this crime. Preeta realizes that Sherlyn and Mahira are evil harming the Luthras.

Mahira tells Preeta that she will tell the complete story to her. She tells Preeta that she saw Sherlyn pushing Mahesh down. She tells that Mahesh was getting saved, he got a hope that she will save him, but then he got a big shock to see her deadly truth. She tells that she has broken Mahesh’s hopes and threw him down the stairs. She feels joyful that she has finally won to get Karan in her life. Preeta feels Mahira is really disgusting. She wants to expose Sherlyn and Mahira’s truth.