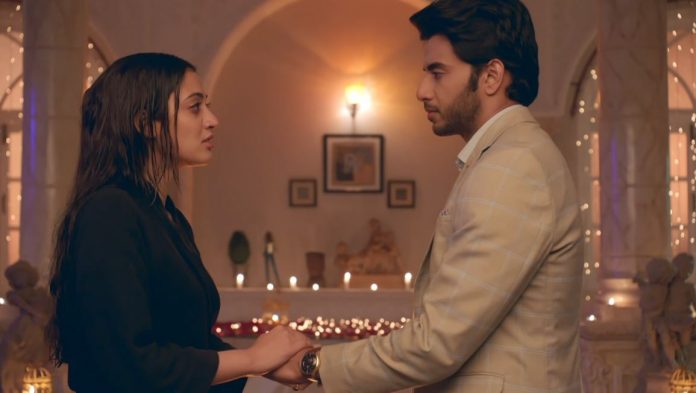 Starplus Aman Roshni charming Jadu gets new entry Aman wants Tabeezi to help him in tackling Roshni’s problem. He tells Tabeezi that the day is repeating so that they can save Roshni by finding some way. He asks her to just find the solution by the key found in the magical cave. He then finds Roshni missing. He finds Roshni enjoying a soothing bath. He is happy that she is fine. They both share some sweet moments.

He is always scared of losing her. He doesn’t want any danger to reach her. He thinks the house isn’t a safe place and they should be at the farm house. He wants to stay with her always. Roshni doesn’t know about her pregnancy still. She doesn’t know that she has to protect her twin babies. Aman isn’t aware that she is ignorant of the pregnancy truth. Chotu risks his life to enter the magical cave.

Imran and Farah empower them with their motivating words to reach the door to the magical cave. Chotu doesn’t get any help from Locha Pari, who later helps Imran and Farah in crossing the bridge with ease. Aman and Roshni have their sweet conversation and reminisce the life’s journey since their first meet. Roshni tells him that she can even die for him. Aman agrees that she risked her life to save him. He jokes that she has troubled him more after saving his life. Roshni and Aman call each other stubborn. She tells Aman that he is much filmi, he can be heroic and risk life, but doesn’t have courage to say sorry.

She wants him to trust her. He shows his faith on her. He promises that he won’t let any harm reach her. Roshni tells him that she wanted a cute life, without his Jinn adventures. Aman regrets to trouble Roshni in the past by not trusting her and taking revenge on her. He thinks its time he apologizes to her. Being Ayana, she shows a big heart and forgives him. Aman tells her that they can’t be going home until her life is secured. She expresses her wish to spend time with family. Roshni learns that Aman has been killing himself to repeat the day to save her life. She tells that he can’t die until Ayana kills him.

She realizes his unspoken love. She asks him to promise that he won’t harm himself on failing to save her life. Roshni wants to love him. She asks him to not blame himself for any mishap. Aman doesn’t want to false promise her, since he can never live without each other. She tells that she is missing the family a lot. Aman wants to keep her safe. She wishes to head to home. Junaid’s entry brings a big twist in the story. Junaid will be the new evil force in Aman and Roshni’s life.