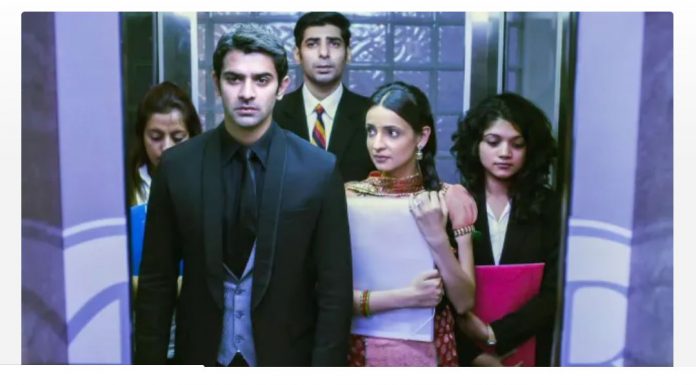 Iss Pyaar Starplus Daily Surprise Arnav Khushi Rabba Ve Moment first ever in Season 1 Episode 3. Khushi gets in guilt after thinking of the accusation by her mother. She didn’t wish Garima to disregard her as her daughter. She prepares hot jalebis to feed herself and calm her sorrow and anger. She blames Arnav for spoiling things in her family.

Meanwhile, Arnav is still hurt thinking of his past, his mother’s death in the palace. He gets the news of the media getting Khushi and his odd moment clip. He orders his manager to do anything to cover it up. He gets emotional when Anjali surprises him with the homemade food. Anjali cares for him. She doesn’t want to leave him alone when he is facing the past dilemma.

She hopes that her brother turns loving and humble once again, like he was in his childhood. She isn’t scared of his fake anger. Arnav and Anjali’s strong bond is seen. Anjali doesn’t want him to hurt himself by staying stone-hearted. She stays back with him in the palace to remind him about her old promise. She tells him that she will be troubling him if he doesn’t fulfill her mannat. Arnav is ready to keep her wish. Little does he know that the fate will bring him face to face with Khushi again at the shrine.

On the other hand, Shashi apologizes to Khushi on her Bua’s behalf. He tells her that she isn’t his real daughter, but it doesn’t matter, since he has always raised her as his daughter. She knows that relations of heart are more important than blood relations. He wants her to always confide her moves and then act, else she will be leaving her family troubled. She apologizes to Shashi. He tells her that one has to be justified to own heart first, since heart never cheats them.

He defends Khushi in front of Bua. Shashi and Khushi get applauded by the neighbors for refusing to dowry demanding groom. Shashi and Garima realize that Khushi has done the right thing. Khushi gets support surprisingly from one and all. Guptas head to the shrine, so that their lives don’t stop by any sorrowful news. Khushi wants Payal to be happy. Shashi also tries to cheer up Garima. Guptas visit the holy shrine. Khushi tells Payal that Garima isn’t forgiving her, just because of Arnav. She wants to reprimand Arnav on meeting. Arnav and Khushi happen to be at the shrine at the same time and pray together for their sisters.

They have the same emotions for their sisters’ happiness and future security. Khushi wishes that things get normal like before. Khushi also makes a mannat along with Arnav, again at the same instant. She soon meets him when she goes to secure his mannat. She wants to make him realize his mistake. She runs after him with slippers in her hands. She doesn’t want him to go without a self realization. Arnav doesn’t care for her word. She yells at him and doesn’t care for his richness. Arnav decids to make the footage go viral to defame her. Arnav and Khushi fight rudely and yet happen to get their first Rabba Ve moment.

Reviewed Rating for this particular episode: 5/5 Best moment of Mannat thread ties and the Khushi chasing Arnav with slippers in hand.
This rating is solely based on the opinion of the writer. You may post your take on the show in the comment section below. Like the post for us to continue the episodics.