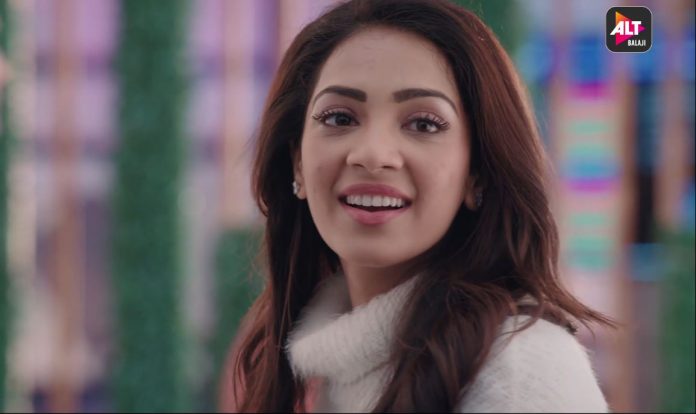 Alt Series Rithvik shocks Palak Dil Hi Toh Hai Episode 9 Rithvik gets a girl home with him. He introduces his good friend Vikrant. Vikrant asks Rithvik why is he doing this, when he is just recovering. Rithvik tells him that the girl will help him recover. He thinks the girl’s touch is healing. Vikrant is sure that Palak can’t see all this.

He wants to stop Palak from seeing Rithvik with the girl. Mamta is happy that Rithvik is back. She feels Vikrant is suffering. Rithvik romances the girl. He imagines Palak around and gets disturbed. Vikrant wants Jia and Dia to go to sleep. Taari asks him to recite some bedtime stories for them. Jia wants to know whom he loves more, Dia or her.

Taari asks Vikrant to just tell them. Vikrant asks Palak to just go, he will get the medicines for Rithvik. Palak goes to give the medicines to Rithvik. She gets much disturbed to see Rithvik with a girl. Palak and Rithvik get into an argument. Vikrant asks Rithvik not to behave like a bachelor. He wants to take the girl to a hotel suite. He tells Vikrant that its his room, he can do anything he wants, he isn’t cheating anyone. He asks Vikrant to tell him if anyone was waiting for him since two years, if he has any wife to whom he is committed. He asks Vikrant and Palak to be happy together. He wants them to let him stay happy.

Vikrant knows that Palak is broken apart. He goes to see Palak, who deals with her anxiety. Vikrant doesn’t want her to cry. Palak tells him that she will die by the pain. Vikrant asks her to stop taking stress. He wants to stop the overthinking. She tells him that feelings aren’t in her hand, her heart break is hurting like hell fire. She tells him that Rithvik has come back, but she can’t tolerate Rithvik with someone else. Vikrant understands her. Shivam breaks her guitar. Shivam, Rohit and Aman discuss that Palak should be with Rithvik. Shivam doesn’t know why Vikrant is at their house.

He wants Vikrant to leave. Vikrant acts like Palak and cries to make her smile. He mimics her. Palak tells him that he can’t make fun of her. Vikrant asks Palak not to worry, Rithvik doesn’t remember her, if she gives him time, then he will realize their past love. He tells her that he will beat Rithvik if she wants. She asks him what would she do if Rithvik marries someone. Vikrant asks her to have patience, Rithvik is doing this to recover soon.

He cheers her up by showing Dia’s drawing. He tells that she is really a super mom. Palak doesn’t want to be with Rithvik. She wants to be with her daughters. He tells that he is also missing them, he can’t leave the business unattended, he will join her later. Rithvik doesn’t romance Mahek and makes excuses to get away from her.

Next day, Palak meets her friends. She tells that Vikrant is going for the merger meeting, Vikrant loves Jia and Dia a lot. Setu and Ananya ask her to just accept Vikrant. Setu tells her that Vikrant really deserves her. Palak can’t love Vikrant, despite the same advice from her friends. Rohit informs Shivam that Setu is asking Palak to accept Vikrant. Shivam gets angered. Aman tells that if Rithvik can get a girl home, then even Palak has a right to move on with Vikrant.

Rithvik awaits Palak, unaware the fact that she is affecting him. He asks the doctor to call Palak. Doctor tells him that Palak isn’t there. Rithvik calls her unprofessional. He vents anger. Palak thanks Vikrant for helping her. She tells him that she will be finishing her packing. She doesn’t want to have any return tickets booked so soon. Rithvik asks her where is she going. Palak asks him not to cross his lines. She tells him that she is leaving since he wants so. He asks her to just treat him like a patient. He tells that he won’t die without her, she can’t threaten him, like she is important to him.

He tells her that he was in coma for two years because of her unlucky touch. He fires her from the job. She breaks into tears. He thinks what’s wrong with him. Rohit, Aman and Shivam accompany Rithvik to the park. They have a talk about Rithvik’s relationship with Palak. Rithvik tells them that he hates Palak. They want Rithvik to try and recall Palak. Rithvik tells them that he has fired her from the job. They realize that Rithvik still has the same attitude. They ask Rithvik to stop Palak from leaving. Rithvik doesn’t think that he can stop her now.

Reviewed Rating for this particular episode Alt Series Rithvik shocks Palak Dil Hi Toh Hai Episode 9: 4/5
This rating is solely based on the opinion of the writer. You may post your take on the show in the comment section below.