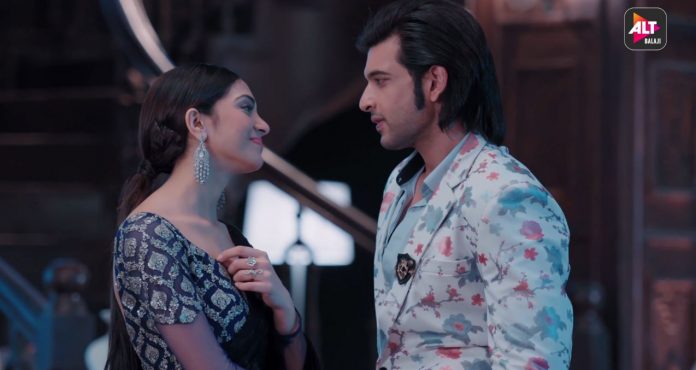 Alt Balaji Prime dramatic Dil Hi Toh Hai Episode 18 Palak gets ahead with Rithvik’s physiotherapy. She asks the reason for getting the family along. He tells her that he is protecting himself from her. She wants to know what had happened. He teases her with lies. She tells that she was drunk. Vikrant asks Rithvik not to trouble Palak.

Rithvik tells Vikrant that she is feeling awkward, because of his presence. He tells that he will make Palak confess his feelings to him. Rithvik and family discuss about surprising Rohit and Setu. Kartik tells that they should make the couple repeat their wedding vows. Rithvik asks Kartik to pen down some amazing poetry. Vikrant tells Palak that he can’t drop her. He asks her to go with Rithvik. Rithvik offers lift to Palak.

She doesn’t want to accept his help. Vijay hires a spy to get information about Vikrant. Mamta asks Vijay not to spy on children. She tells that Vikrant is divorcing Palak. He feels sorrowful for Vikrant. Rithvik tells Palak that he would be possessive for his girlfriend. He tells that Vikrant is really forgiving, he doesn’t show any rights. Rithvik and Aman try to know about Ananya’s boyfriend. Ananya passes her phone to Palak. Palak runs with the phone. Rithvik chases her for the phone. They have a moment.

Palak falls down and gets hurt. Rithvik takes care of her. He tells her that he was in a similar situation before. Kartik wants them to come and hear his poetry once. Shivam suggests Shanaya an idea. He makes Palak and Rithvik rehearse the romantic poetry. Shivam wants them to say it with more emotions. Rithvik thinks about the feeling like he knows Palak since before.

He wants to know if he had a love bond with her. Palak’s silence troubles him more. Setu tells Rohit about their son’s problem at the school. Rohit tells her that he is busy in some work. Rithvik meets everyone in the party. He really thinks Vikrant has much patience that he is managing Palak. He tells that Palak isn’t an easy person to befriend.

Shivam and Aman try to make Vikrant out of the party, so that Rithvik and Palak can perform together. They lie to Vikrant and send him to get Setu to the party. Shivam informs Rithvik that Vikrant left and Palak is awaiting for a dance partner for rehearsal. Rithvik doesn’t listen to him. He tells that Vikrant will soon come.

Rohit tells Vikrant that Setu is trying to avoid him and insult. Vikrant tries to find out about her. Rohit asks Vikrant not to be foolish in his one-sided love. Aman asks Vikrant to stop Rohit some way. Rithvik gets to see Palak in a stunning avatar. Rithvik teases her, but she doesn’t react, knowing he is lying.

Vikrant stays busy with Rohit. Palak asks Rithvik was he willing to have romance with her, since he is just pulling a prank. She doesn’t want to leave hopes. He tells her that he won’t have any such intention. She asks him not to drag the matter if nothing happened between them. He wanted to see if she is fooling Vikrant. She tells him that he doesn’t need to care for Vikrant. She asks him to realize that every woman isn’t a gold digger.

She is sure that nothing has happened between them. Rithvik tells that she is different, but he doesn’t want to feel for her. She asks him if he hates her. He tells her that he is passionate about her. They have a romantic moment. Rithvik gets drawn towards her.

Reviewed Rating for this particular episode Alt Balaji Prime dramatic Dil Hi Toh Hai Episode 18: 4/5
This rating is solely based on the opinion of the writer. You may post your take on the show in the comment section below.